Celesteela (テッカグヤ, Tekkaguya) (codenamed UB-04 Blaster) is a Steel/Flying-type Pokémon introduced in Generation VII. It is one of the two UB-04, the other being Kartana.

Celesteela is a tall, somewhat cone-shaped, grayish-green Pokémon. It has a long, thin, segmented white neck and a small head. It has a small mouth, long, grayish-green "hair" that reaches its lower body, two cyan dots on its hair that resemble eyes, white stick-like objects going through its hair and forming an X shape, and a cone-shaped spike on its head with two rings around it near the base.

Celesteela's lower body is shaped like a bamboo shoot and surrounded by a four-layered green structure that resembles a dress or vest somewhat. Underneath that is a white pattern that resembles woven reeds, and the bottom of its body has six black tubes with aqua-colored rings on the ends coming out of a hole.

Celesteela's arms, which aren't attached to its body but float freely around it, are about as tall as it is and resemble bamboo plants. It has eight-fingered hands, its fingers resembling the tubes on the bottom of its body, and its palms appear to have a similar circular opening. Its wrists have aqua-colored rings around them with rocket-like fins attached to them.

Celesteela's body contains a flammable rocket fuel that it uses to fly and shoot fire out of its arms in combat. Despite not being Grass type, Celesteela can absorb nutrients from soil and appears to grow like a plant.

Celesteela is based on a spaceship, a bamboo plant, and possibly bamboo rockets (a traditional craft in Laos and some parts of Thailand). Its appearance also resembles Princess Kaguya, a Japanese mythological figure who was born from a bamboo stalk and came from the moon. It may also be based on the JAXA moon probe SELENE (nicknamed "Kaguya") who had orbited the moon from 2007 to 2009, the two years lattermost numbers making up Celesteela's index number (#797). With the theory that the original seven Ultra Beasts are based on the Seven Deadly Sins, Celesteela may be based on the sin of sloth, as it is one of the heaviest Pokémon and, with the exception of its high-speed flying, is often depicted as slow moving.

Celesteela is a portmanteau of "celestial" (as it's alien in origin and based on a spaceship), "steel", and stella (Latin for "star"). 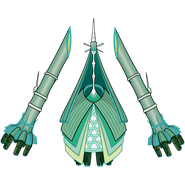 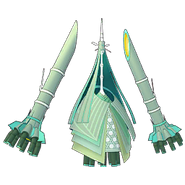 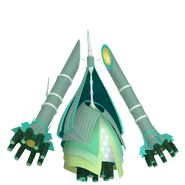 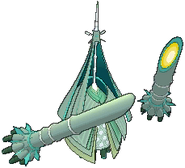 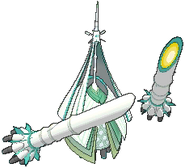