For the variant appearing in the games, see Cedric Juniper.

A Nickname for Tepig
Cedric Juniper is a character appearing in Pokémon Adventures, who is a professor and researcher.

Cedric is a slightly old man, who has grey hair and a short beard. Cedric wears a yellow striped shirt, with his sleeves being pulled a bit and a grey undershirt. Cedric Juniper also wears a dark belt on his brown pants, as well as some grey shoes.

Cedric is a reserved man, who conducts his Pokémon research. Since N's first attempt by liberating Tepig and Snivy from his lab, Cedric holds the regret for not being able to rescue them. It is why he holds a grudge towards Team Plasma.

Cedric was conducting research with his Starter Pokémon. His daughter did the same thing, so the two scientists would compare their results once the experiment was over. However, one night, N, who was recently crowned as the king of Team Plasma, broke into Cedric's lab. Cedric went to stop N, but his Zorua attacked Cedric. N released the Starter Pokémon: Tepig went into the wild, Snivy joined N, while Oshawott returned to Cedric, who raised it.[1]

Cedric Juniper was interviewed on his latest device, the Pokédex. He described it as a device that could collect information about Pokémon. Since he was quite old, he decided to let young ones do this mission in his stead,[2] like young boys and girls. He later visited Professor Juniper in her lab to conduct experiments, unaware that Black, outside the lab, was trying to get his attention.[3]

When Juniper finished her analysis on Victini, and mused to herself that Black was a good trainer for collecting data. Her father, Cedric, appeared, commenting that skilled trainers had to brave dangerous situations. Juniper was pleased that her father has arrived to help her repair the Pokédexes. The two were alerted of Team Plasma's plans, as they tried to catch Victini and kidnap Bianca's Pokémon at Castelia City. Cedric confirmed this, and upon looking at his Samurott, started remembering an incident that had happened a year ago.[4] Juniper also described to Cedric about Black, the trainer she gave the Pokédex to.[5]

With the Pokédex repaired, Cedric went to Castelia City to give it to Bianca. However, Bianca wanted to become the professor's assistant, and instead, Cedric gave the device to White.[6] Cedric was near Mistralton Cave, where he told Iris about the three Legendary Pokémon living in that cave. As Iris went to introduce him to Black, Cedric Juniper ran off. Later, Cedric met up with Iris, who told him that her friend went into the cave to catch the Legendary Pokémon. Cedric was concerned, as inside were living three strong Pokémon - Terrakion, Cobalion and Virizion - who had no trust in humans. This surprised Iris, as Cedric explained that those three Pokémon actually started a war against humanity.[7]

Cedric Juniper arrived to Black and White, demanding of them to stop N, as he couldn't go away. His Samurott blocked N's path, to which Black wondered how did he even obtain Samurott. Cedric stated he would explain later, but reminded that they had to battle N, king of Team Plasma, to reveal the location of his castle. Thus, Cedric braced Samurott, who stood along Black's Emboar and White's Serperior - the three evolved Starter Pokémon.[8] The three Pokémon fired attacks, which defeated Gigi and Zorua. Cedric explained that it was N who barged into his lab one year ago and released all of his Starter Pokémon. N, however, blamed Cedric and his daughter, for they were taking Pokémon's freedom away, all to gain results from their experiments. N, however, blamed Cedric and his daughter, for their research was the prime cause that trainers captured Pokémon to do their bidding, essentially stealing their freedom. Once N left, his Zorua, using its psychic powers, took out Cedric's Pokédex that was meant to be given to Cheren. N's Tympole blasted a hole through the device, which shocked Cedric.[1]

Cedric, Fennel, Amanita, White and Professor Juniper tended to Black, was still unconscious to witness his Musha abandoning him. Cedric was sad what happened to Black. As others were discussing about the incident that happened a year ago, White admitted that she had encountered Gigi on a rainy day, which matched Cedric's story. Cedric thus assumed that Tepig must've been one of the Starter Pokémon that had run away. After Black woke up and left to face Drayden, Cedric and Professor Juniper were approached by Caitlin and Marshal. Marshal told that the Gym Leaders were somewhere in Unova region, while Caitlin used her psychic powers to focus and attempt to find them. Caitlin used her powers, and detected that the Gym Leaders were in a dark place. She conveyed their message: "HELP".[9]

Much to their surprise, the group saw on TV as Drayden announced that Black was the 32nd participant. Realizing he defeated Drayden and obtained the last badge, the group stormed out to meet up with Black.[10] Cedric joined White at the Pokémon League to watch the battle between Cheren and the Hood Man. He reminded that the winner would face Black in the finals.[11] He was shocked to see when Cheren took Black onto the rooftop to continue their battle.[12] Cedric observed as Black awakened Reshiram.[13]

Cedric observed Black and Reshiram battling N and Zekrom, and wished there was a way to help Black. Looker, disguised as Lou-karr, went to help Cedric get closer to Black. He sent out a balloon of the International Police, which surprised Cedric that Lou-karr was one of them. Lou-karr realized the truth was out, and went aboard the plane with Cedric, and Leo joined them, too. In mid-air, the three trainers sent their Pokémon to attack Zekrom, to support Black. However, Zekrom didn't take much damage, and blew the Pokémon away back to their balloon. Thus, Cedric asked of Black to give him his Pokédex. Black sent Brav to deliver the Pokédex, to which Cedric upgraded it with the information of dragons, which he studied from ancient ruins and scriptures, to let Black better understand Reshiram. With the upgrade finished, Cedric passed the Pokédex to Brav, who gave it back to Black.[14]

Cedric was in Fennel's Lab at Striaton City, which was frozen. He contacted Drayden, and learned Team Plasma, who flew a flying ship, captured Kyurem and used its power to freeze cities of Unova. He told her daughter the Gym Leaders were preparing for a counterattack, but Marlon, Cheren and Roxie have not reported yet.[15] To break through the ice sealing the exit of the Marine Tube, Cheren had Servine, along with Benga's Pignite, Cedric's Samurott and Bianca's Oshawott use the Grass, Fire and Water Pledge moves. The moves collided and shattered the ice. The group later boarded on an airplane, headed to N's Castle, which was on fire from a collsion of the Plasma Frigate. Due to the fire, Cedric had Samurott use Water Pledge, whose power was increased, due to other Pokémon using Fire and Grass Pledge, which doused the fire.[16] 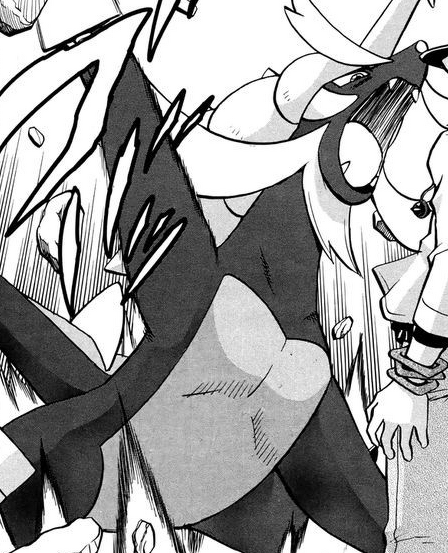 Retrieved from "https://pokemon.fandom.com/wiki/Cedric_Juniper_(Adventures)?oldid=1337603"
Community content is available under CC-BY-SA unless otherwise noted.