[[Masako Katsuki
Megan Hollingshead (Seasons 1-6)
Andi Whaley (Seasons 7-8)
Emlyn Morinelli (Season 9-10)]]
Cassidy is an agent of Team Rocket. She is also the partner of Butch. She is favored by Giovanni due to her success. She also seems to be the rival of the other Team Rocket, Jessie.

She has purple eyes and gold hair worn in pigtails. She also wears a pair of triangular pink earrings. Her Team Rocket uniform takes the form of a black short-sleeved minidress with the team's red R logo on the front, plus white gloves that reach the sleeves and have a red stripe near that area, and white thigh high boots with the same stripe near the tops and a small heel.

She is extremely arrogant, vain, conniving and constantly infuriates Jessie with her snobbish attitude and belittling remarks; however it could be argued Jessie is just too easily annoyed and sensitive. She also seems to be very smug and proud about her rank in the organization. It's likely that she and Butch have been successful many times in the past, earning Giovanni's trust. Unfortunately for them, every time they have a plan running smoothly when they show up, it always gets foiled by Ash and friends, and the duo are carted off to jail, or blasted off again.

Cassidy shares a bitter rivalry with Jessie. It is possible that they met before Training Academy, which is most likely where the rivalry started. In the episode 'Training Daze' they were shown racing each other on the treadmills, it then showed the two of them in the locker rooms afterward, where Cassidy began to pick on Jessie about her 'reputation for being difficult around the place' along with demeaning 'hon's and 'sweetie's. Then again, it's plausible that their rivalry goes back further than their training days. Cassidy's endless taunts and remarks about how she's more competent and successful winds Jessie up to no end, and Cassidy seems to take great pleasure in provoking her rival.

She is one of the only characters who manages to get her partner Butch's name right- most of the time; as well as James. It also appears that Cassidy is the more dominant half of her team. In The Breeding Center Secret' she acted as the spokeswoman for their phony breeding center, luring in the crowds and putting on a 'nice' act while Butch stayed in the background. She seems to boss Butch around a little- this is seen a lot in the episode 'Luvdisc Is a Many Splendored Thing' where she repeatedly yells commands at her partner such as "Gun it!" or "Get a move on, Hutch!" and "Never mind this mushy stuff, after them!" Butch seems to go along with it without complaints, however. However it can be noticed that Cassidy treats Butch kinder than Jessie treats James. In-fact in the The Old Berate and Switch episode; when Cassidy was paired with James; and Jessie was partnered with Butch; it can be noted when Butch got the motto wrong; Jessie kicked him. While when Cassidy did the motto wrong with James; saying "whenever there is a piece of pie in the universe" when he questioned her about saying "piece of pie?" she simply yelled at him; embarrassed, and never touched him in a violent manner.

Cassidy is a member of the Team Rocket Duo. Cassidy was a recruit in the Team Rocket Academy to become an official member of Team Rocket. During a test she took, Cassidy along with Butch and Raticate as her partners have become the top group of trainees in the Blue Team. She and her partners compete with the Red Team on catching the red-colored Snorlax. Even though neither side managed to do so, they were made into official teams.

Cassidy made her first non-flashback onscreen appearance in The Breeding Center Secret where she along with Butch build a Five-Star Breeding Center. Cassidy advertises the breeding center in order to attract customers. She and Butch successfully get many Pokémon including Misty's Psyduck and James's Weepinbell. When Ash and his friends return to the breeding center, they overhear Cassidy reporting back to Giovanni. After Jessie, James and Meowth enter the breeding center, they get caught in the act by her and Butch. While Butch had everyone except Misty, Pikachu and Togepi caged, Cassidy resumes her job as a breeding center worker, so when the local Officer Jenny arrives upon being called by her and Butch, Cassidy works up a sob story that frames Ash, Brock, Snap, and Cassidy's fellow Team Rocket operatives as the criminals, having Jenny cart them off to the precinct in an armored paddy wagon. Misty disguises herself, and she has Cassidy look for her Psyduck to distract her while Pikachu went to get the camera, avoiding Butch in the process. The Psyduck gets returned and Misty goes to Officer Jenny to show her the evidence from Snap's developed photos. Ash, Brock, and Snap are freed, and a furious Jenny returns to the breeding center to confront Cassidy and Butch for framing Ash and the others and lying to her. Cassidy battles Ash after her cover gets blown, but her Raticate is defeated by Pikachu and she and Butch are restrained from escaping by Bulbasaur. She, along with Butch, are taken to jail.

However, it appears they have good favor with Giovanni, as they are released and attempt another plan on Mandarin Island in the Orange Archipelago, using a Drowzee and a device that amplifies Drowzee's power, causing various Pokémon to turn against their Trainers. However, Ash dupes Pikachu into attacking him while standing in front of the machine, damaging it and knocking Drowzee out temporarily, returning Pikachu and the other Pokémon back to normal. Cassidy and Butch don't give up, but when the Drowzee attempts Metronome, Togepi Mimics it and its Metronome sets off Explosion, wrecking Cassidy and Butch's base, and leading to them being arrested again. 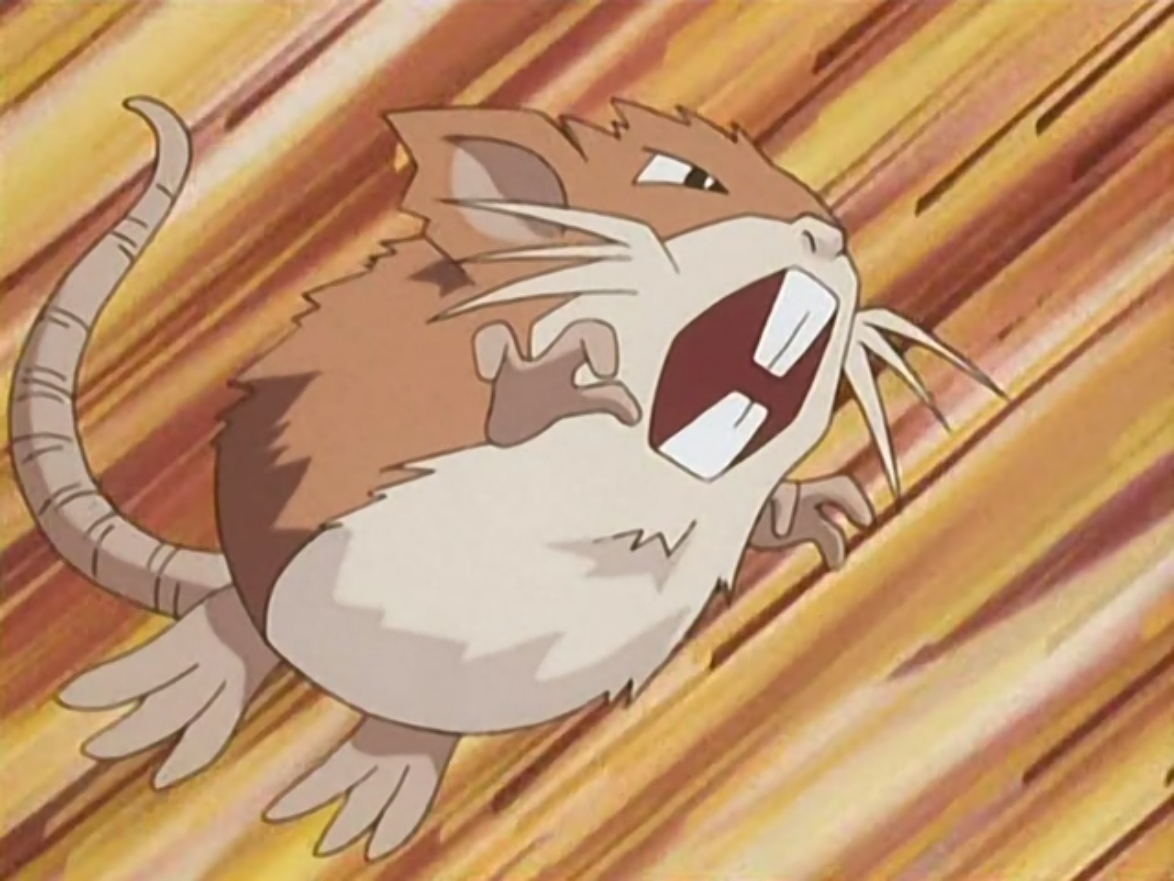 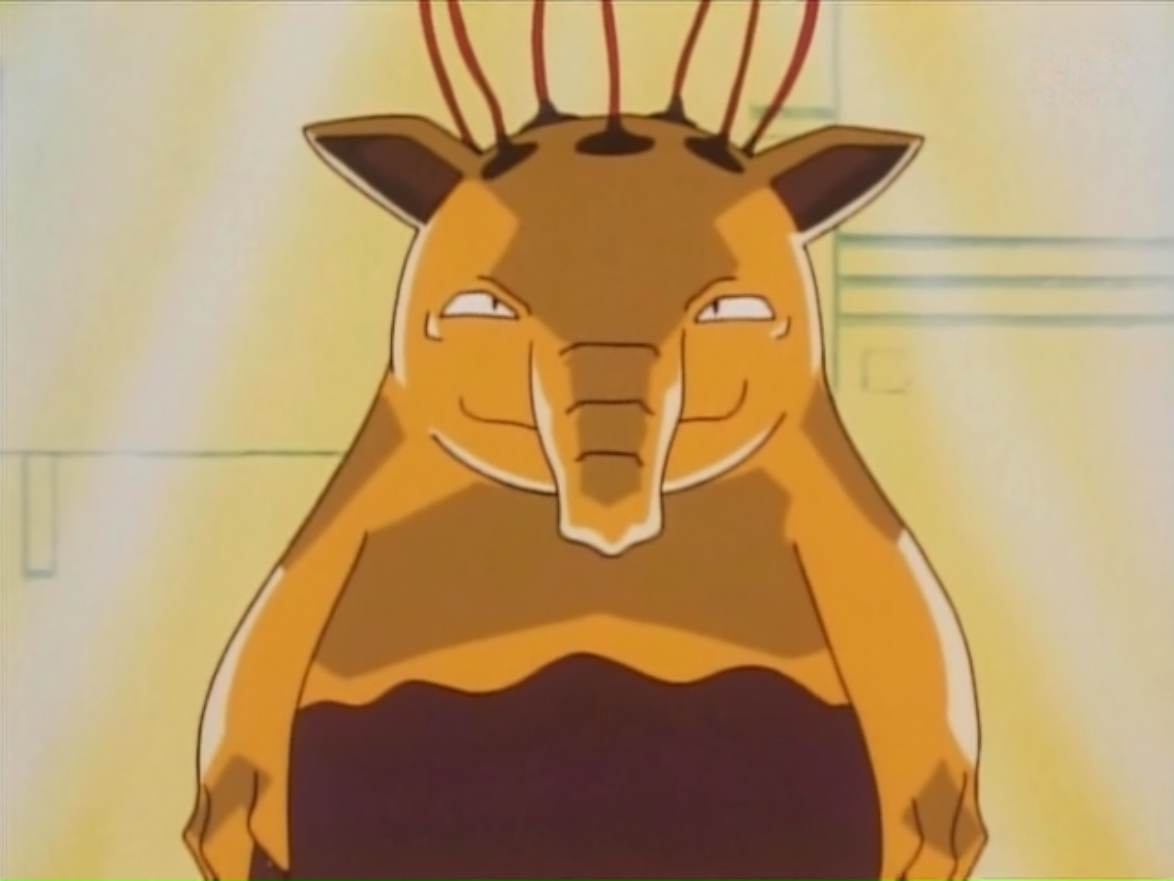 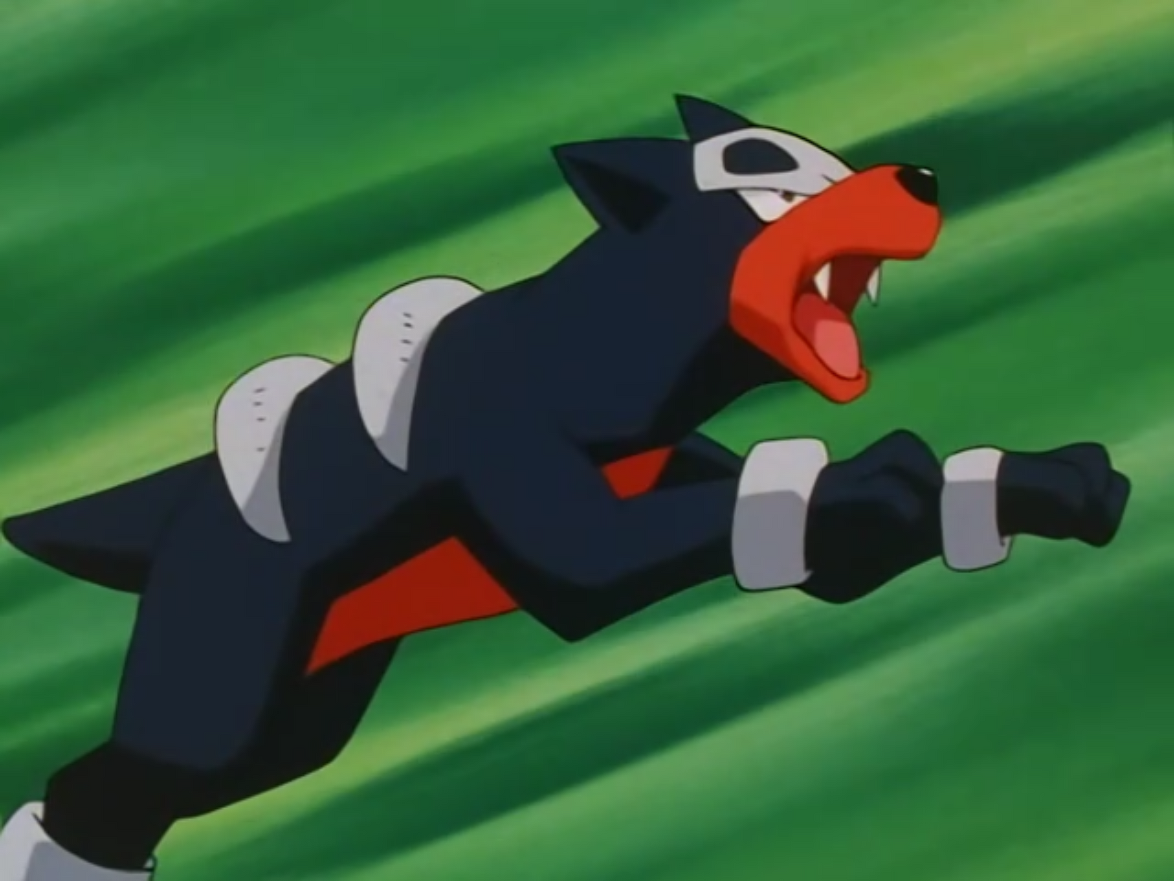 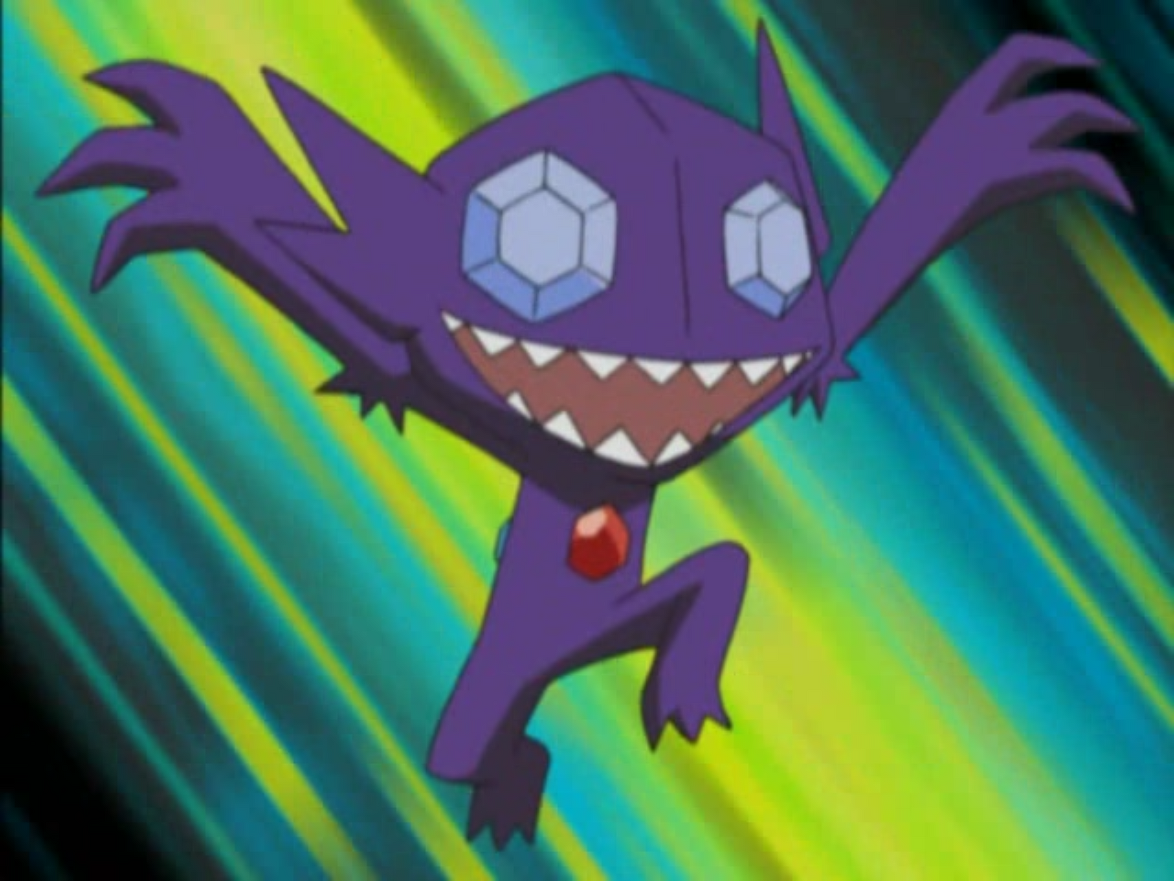 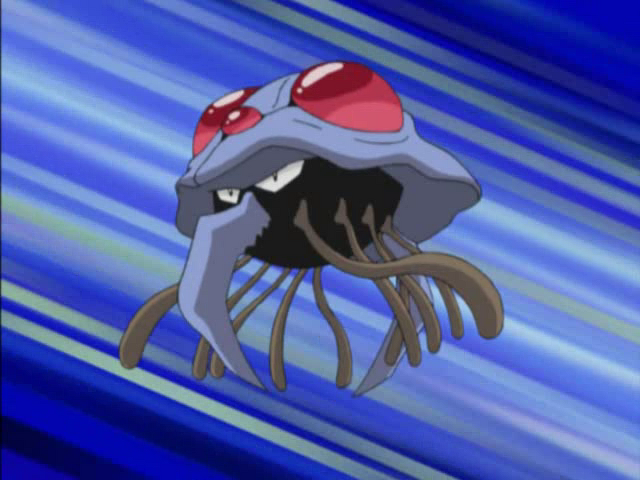 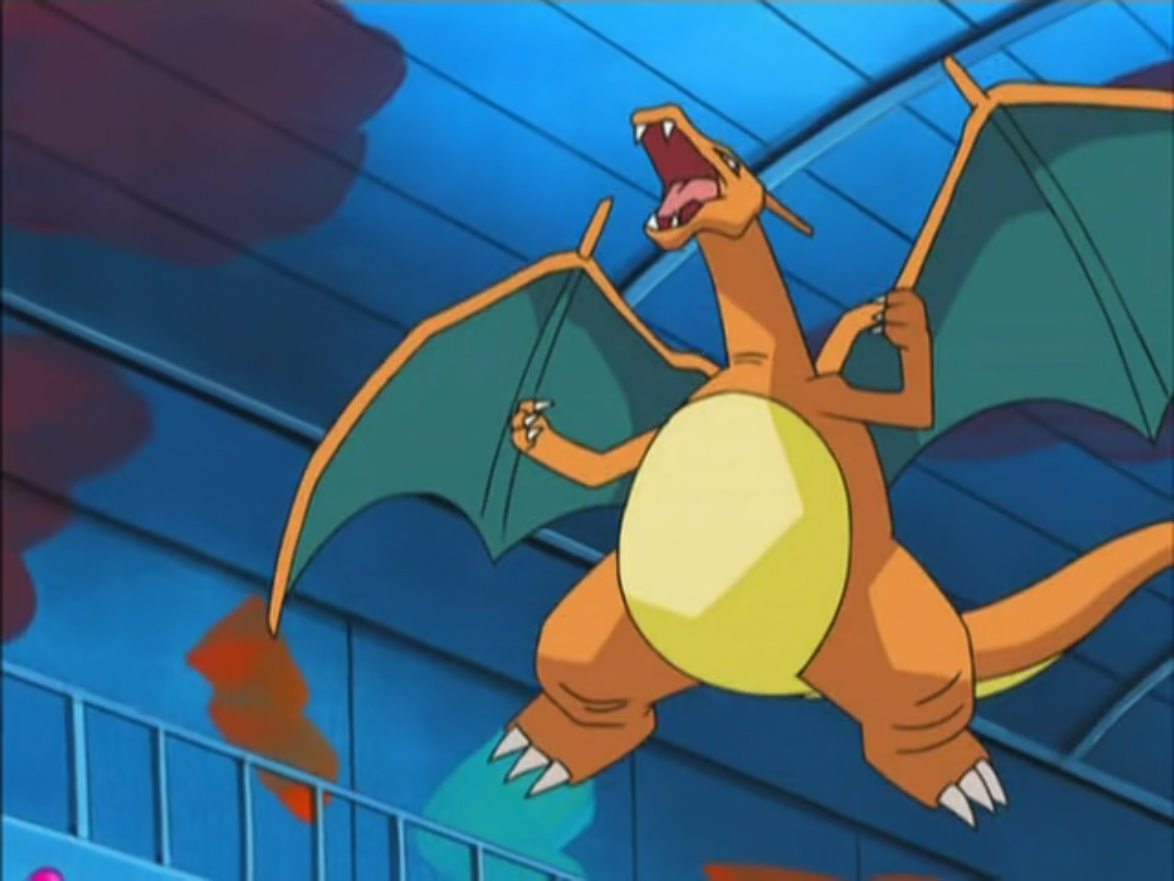 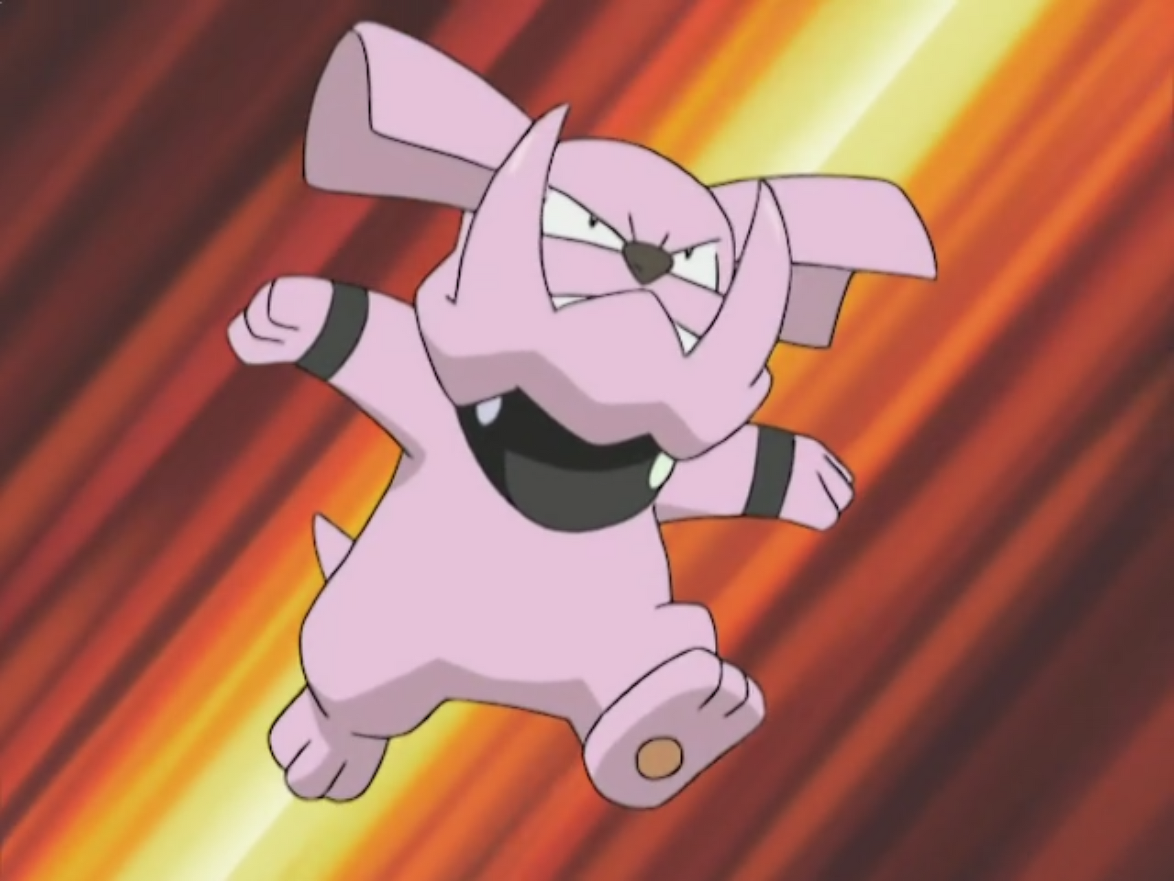 Cassidy without her lipstick.

Cassidy saying her name during their motto.
Add a photo to this gallery
Retrieved from "https://pokemon.fandom.com/wiki/Cassidy?oldid=1347731"
Community content is available under CC-BY-SA unless otherwise noted.