Cartoon Network's logo from 2010 to Present.

Turner Broadcasting System
Cartoon Network is a channel in the United States launched by Turner Entertainment in 1992. The network started airing Pokémon episodes in 2001, sharing times with Kids' WB!, before that channel closed in 2008. In 2006, the network started premiering new Pokémon episodes after Kids' WB shut down. Pokémon also started airing on Boomerang, the sister channel for Cartoon Network, in 2000.

On November 17, 2016, the lease for the Pokémon anime rights expired for Boomerang/Cartoon Network and Time Warner, owner of Turner/Warner Bros. refused to renew it. Instead, The Walt Disney Company announced it would pick up the series starting with the Sun and Moon season, as well as rights to rerun the previous episodes. New episodes and reruns would move to the Disney XD channel starting in 2017.[1]

Episodes were previously offered on Toonami Jetstream, a streaming service between Cartoon Network and Viz Media. It officially closed down on January 30, 2009. It originally added episodes from Season 3, beginning with The Pokémon Water War. Although season 3 begins the last 11 episodes to use the title Adventures in the Orange Islands, uses two opening themes, and contains episodes from two different regions, the whole season including the 11 last Orange Islands episodes used the name "The Johto Journeys". 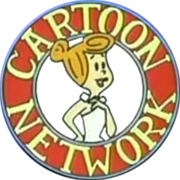 Cartoon Network's logo since 2010-
Add a photo to this gallery

Retrieved from "https://pokemon.fandom.com/wiki/Cartoon_Network?oldid=1285638"
Community content is available under CC-BY-SA unless otherwise noted.