Carkol is shaped like a mine cart made of coal. It has a round head that has teeth made out of red-hot coal. Its four legs resemble the wheels of the mine cart and functions like them. It carries a pile of burning coal on its back.

The coal formed from Carkol's body once helped fuel the lives of people living in Galar. It can travel over 18 mph by rolling all four of its legs very fast. It can also breath fire that can reach 1,800 degrees Fahrenheit.

Carkol's design is based on a mine cart that miners used to carry coals out of the mines.

Carkol may be a combination of car, cart, coal, and charcoal. 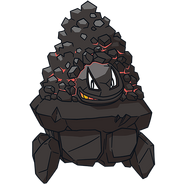 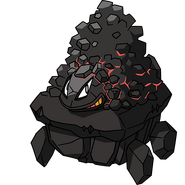