For the variant appearing in the games, see Candice.

Candice is a character appearing in Pokémon Adventures, who is the Gym Leader of Snowpoint City in the Sinnoh region.

Candice has black hair tied into pigtails with blue scrunchies and amber eyes. She also has blue pins on both sides of her hair. She wears an elbow-length long sleeved white shirt, a blue bow on her chest, a short brown skirt that reaches her thighs, and a blue cardigan most of the time tied around her waist but sometimes when just talking worn on top of her white shirt. Candice also wears knee-length white and blue striped socks and brown shoes.

Candice hones her endurance, for wearing thin clothes in the harsh Snowpoint City. She can analyze what others are thinking.

The name Candice comes from "ice", as she is an Ice-type specialist.

Her Japanese name, Suzuna, likely comes from 涼しい (suzushī, Japanese for "cool"). It could also come from 菘 (suzuna, an old name for the turnip, as turnips grow in cold environments).

Candice was the Gym Leader of Snowpoint City, who made posters to challenge trainers to face her in the Gym.[1] She was also Maylene's friend, who described her as a girl with lots of authority. In fact, Candice made the rules to forbid anyone going to Snowpoint Temple or Lake Acuity without her permission.[2]

Candice and Abomasnow encountered Platinum lying freezing in the snow. Abomasnow picked her up, and Candice, once Platinum recovered, asked where did she stay. Platinum answered the Snowbound Lodge. Candice also noted that Platinum dressed lightly for the snow, and thought of her as a comrade, since she did that, too. Candice, who thought Platinum was a gutsy girl to do that, reminded that guts has to be in fashion, romance and Pokémon. However, Platinum fell asleep, so Candice placed her at the doorstep of the lodge. When Platinum woke up, she saw a poster of Candice, and learned she was the Gym Leader of Snowpoint City.[1] Platinum read the poster, and noted that's the girl that had saved her. She also encountered Maylene, who was going to see Candice and train with her, so they could overcome their weaknesses. Platinum eventually came to the Gym to thank Candice for saving her. However, the Gym statue pushed her inside, thinking she came here for a Gym challenge. Platinum eventually came to the battlefield, where she encountered Candice. Candice greeted her, and received thanks from Platinum for saving her from freezing. Candice was pleased, but noted Platinum came for a Gym Battle. Platinum assumed she was at an advantage, and her Empoleon defeated Snover with one attack. However, Candice braced herself, for even if she underestimated her opponent, she prepared a special Pokémon for the fight.[2]

However, Candice's Snover used Seed Bomb, which defeated Platinum's Empoleon, too. The two sides sent Abomasnow and Rapidash. Since Rapidash got hit, Platinum wanted to end the Gym battle as quickly as possible to go to Lake Acuity, and had Rapidash use Rest. Candice became displeased, as she read Platinum's face, and realized her intentions: she came to thank Candice, but was dragged in to face her in a Gym Battle, and now wanted to end the battle quickly so she could go to Lake Acuity. Candice wasn't impressed, and her Froslass dealt lots of damage with Wake-Up Slap. Candice almost wanted to end the battle, but thought the Gym statue - Sinnoh Pokémon Association director - would blame her as being selfish, but was still disappointed in Platinum. In fact, she was grossed out by Platinum's indecisiveness, as Platinum thought she would think of a way to end the match she started, and pointed out Team Galactic as example. Platinum became inspired by Candice's words, and sent her newly obtained Lopunny, who jumped around her Abomasnow, and took it down with Jump Kick. Platinum realized that Candice scolding her was a good thing for her to push her to do better, just like Pearl did to her. Candice became impressed, and sent Froslass, who bound Lopunny to the ground and defeated it. As Candice gloated, her Froslass was quickly taken down by Platinum's Rapidash. Candice was at shock, since Rapidash should've been exhausted, but was told Lopunny used Healing Wish. Candice admitted her defeat, and gave Platinum the Icicle Badge. She also explained that she knew about Team Galactic, as she was connected with the other Gym Leaders; Byron told her about that. She advised Platinum that she should need more Pokémon for the battle, and advised her to catch one of the wild Pokémon at the Gym.[3]

Per Candice's wish, Platinum caught a Mamoswine, but she decided to give that Pokémon to Diamond, since it reminded her of him.[4] Since she was still fired up, Candice invited Platinum and Maylene, as the trio went to Lake Acuity to stop Team Galactic.[3] Maylene and Candice went with Platinum to Lake Acuity. To take a shortcut, Candice sent Abomasnow, who carried the trio. Candice claimed they could brag to the boys how three thin-clothed girls did such an amazing feat, which confused Maylene. The group eventually reached Lake Acuity, and noted Team Galactic hasn't arrived yet, considering the lake was still intact. However, Maylene and Riolu got hit by a Sableye, while Candice got immobilized by a Gastrodon. Candice noted these Pokémon have been trained, and she got complimented by Team Galactic's commander, Jupiter, who appeared before them.[5]

Candice was immobilized, but managed to send her Abomasnow out, declaring she won't let Jupiter get away with this. As Abomasnow went to attack, it was halted by Sableye, who used Shadow Sneak on it. Candice had Abomasnow absorb the attack and attempt to hit Tangrowth, who used Natural Gift, which burned Abomasnow and made Candice fall down.[6] When the air shuttle arrived, Candice, Platinum and Maylene watched whether the Galactic Bomb would be dropped in Lake Acuity.[7] When Uxie emerged, Jupiter went to capture it. Candice sent Froslass to attack her, but the two were knocked out by Gastrodon's Stone Edge.[8]

Platinum had the unconscious Candice and Maylene taken on her Rapidash. Due to the harsh winter climate, Platinum had them all taken inside a temple. She hoped that they'd warm up soon, as Rapidash was sharing its warmth, and was disappointed that neither of them managed to stop Jupiter, and the utter shock and exhaustion made her fall asleep.[9] Maylene and Candice woke Platinum up, as they were at the Pokémon Center. The two girls were grateful that Platinum had rescued them, who remembered that she took them to a temple. Maylene assumed that was Snowpoint Temple, to which Platinum apologized to Candice, since she should've asked her about the permission to enter the temple. Candice didn't mind, but assumed Platinum was just dreaming. Maylene, however, urged them to train, as they needed to grow stronger to take on the enemy. Candice agreed, and contacted Byron, shouting that he didn't warn them how strong the enemy was. She demanded to have him find someone that could train them, to which Byron took the task.[10]

The two went to a field, where they encountered Volkner. The two were surprised, since Volkner was never this early. Volkner assumed that Platinum was his challenger, but when told he was there to train them, Volkner lost interest. Still, Platinum inspired Volkner to battle her, which amazed Candice and Maylene that she persuaded him. While the battle was conducted, Volkner began gaining interest, and declared he'd have a battle with Candice and Maylene as training, but only after his battle with Platinum ended.[11] Platinum won the battle against Volkner, and Candice and Maylene congratulated her on winning the eight badge. Since Platinum was off to Veilstone City, the "thin-clothed girls" united their hands, promising to fight Team Galactic. Thus, Maylene and Candice bid Platinum farewell, as they went to train with Volkner.[12] Candice, Maylene and Crasher Wake went through the underground tunnels to Mt. Coronet. There, they teamed up with Fantina, Roark and Gardenia against Team Galactic's commanders. The six Sinnoh Gym Leaders introduced themselves, which frustrated Team Galactic's commanders. Still, the trio decided to take them on, so Candice joined Maylene to fight Jupiter.[4]

Candice and Maylene faced Jupiter, whose Tangrowth went to use Natural Gift. However, Candice's Abomasnow fired Ice Shard and Maylene's Riolu used Aura Sphere, which defeated Tangrowth and Jupiter. The two girls cheered, as they fulfilled Platinum's oath that they'd defeat Jupiter. They went with the rest of the Gym Leaders to the stairs to reach Cyrus, but space and time was being warped, and prevented them from reaching him. Thus, Byron had the Gym Leaders go underground, where Professor Rowan gave them instructions on how to reach Cyrus. Thus, the Gym Leaders went through the tunnels and emerged from the ground where Cyrus was. Candice had her Abomasnow damage the Red Chain, in hopes of destroying it. Cyrus sent his Pokémon to stop them, but the Pokémon endured, until the chain snapped. Cyrus held the destroyed Red Chain, and since he could no longer control Dialga and Palkia, he shouted at the Gym Leaders that he won't forgive them.[13]

The Gym Leaders were defeated by Dialga and Palkia, who went on a rampage. They went unconscious, and were soon found by Cynthia and Platinum. Candice briefly woke up, and noted Platinum to be late. Still, she admitted that the Gym Leaders liked her, after she defeated all of them, and gave her a Froslass to assist her in battle.[14] Per Cyrus' plan, the Gym Leaders were deemed as incomplete, and were pulled to the hole, created by Dialga and Palkia. Diamond, Pearl and Platinum tried to pull them to the ground, but failed. However, a Regigigas appeared from Platinum's bag, and lowered the Gym Leaders down to the ground.[15]

With Cyrus defeated, the distortions of space and time stopped. With nothing else left, Diamond, Pearl and Platinum placed the Gym Leaders on their Pokémon, and went to take them to the hospital.[16]

Looker and Platinum remembered Candice, due to her powerful status, for she was connected to the rest of the Gym Leaders, as well as the Elite Four and Frontier Brains of Sinnoh region.[17]

After the conflict between Dialga and Palkia had ended, Candice was taken to the hospital, where she was recuperating.[18] When Platinum confronted Hall Matron Argenta, she sent Froslass, and remembered her Gym Battle against Candice.[19]

Candice and the rest of the Gym Leaders had recovered, and went to Byron, who awaited them with open arms.[20] 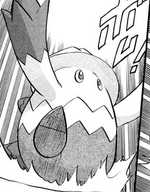