Cameron in other languages

Cameron is a character appearing in the Pokémon the Series: Black & White.

Cameron is a boy with brown hair and blue eyes. He wears a yellow shirt with orange stripes on his shoulders, a pair of blue shorts, a pair of white socks and orange-black shoes with white soles. He also wears an red-orange headband and a white scarf.

Cameron has a bad habit of making a lot of mistakes, such as believing that trainers only needed seven badges to enter the Unova League, or that a Full Battle uses five Pokémon instead of six, or that the League taking place in Blackthorn City, which was in the Johto region. He also has a habit of hitting himself on the head by stretching his headband frustrated to try and think of a good idea. Though he does have very impressing battling skills as shown when he battled both Marlon and Bianca, as well as Ash in the Unova League. Cameron also seems to like taking risks in battle, such as when he sent out his Ferrothorn and Swanna against Ash's Pignite and Pikachu, respectively, only for them to be quickly defeated due their large type disadvantages.

Cameron appeared alongside his main partner Riolu and was meant to compete in World Tournament Junior Cup. Noticing Pikachu, Cameron pulled out a TV remote, but seeing he made a mistake, he took out his Pokédex he was meant to scan Pikachu with. Much to his disappointment, he was too late and the Junior Cup was over already. Later on, he shows up after Ash and his friends say their farewells to Dawn. There, he officially announced that he is going to enter the Unova League and had thought it took place in Johto's Blackthorn City. He has originally mistakenly thought that trainers only needed seven badges to enter the League but found that he needed eight to enter, making him frustrated, for there was no Gym around. Jervis told him there is a gym near a Town located in Humilau City. He decided to head there; Ash and friends offered to go with him and gladly accepted.[1]

As Cameron along with Ash and his friends were travelling Humilau City, Cameron, Ash, along with Riolu, Pikachu, and Meloetta got lost in the forest. Cameron and Ash tried many ways to find out where the city was, but the rain got them wet. Instead, the two gave it a rest, deciding to camp out on a cave along with the other Pokémon that night. During the time, Cameron admitted he wanted to become the Pokémon Champion and vouched for Ash in pursuing his dream to become the Pokémon Master. The following day, Cameron and Ash sensed salt in the air. Cameron ran off, but nearly fell down a cliff, but was saved by Ash. The group went out and found Humilau City. There, they saw a big Wailord coming right at them, the Wailord was owned by none other than Marlon the Humilau Gym Leader. Marlon the gave them a ride and took them to the Humilau Gym, where Iris and Cilan were waiting. After arriving to the Gym, Cameron challenged Marlon to a battle. At first, Cameron was going to use his Riolu to battle, but because he left it on the other side he couldn't use it, and had no choice but to use his other Pokémon. Marlon used his Jellicent against Cameron's Ferrothorn. Ferrothorn, despite its movement limited (being on a pool, serving as a battle field), managed to use Thunderbolt to knock out Jellicent. However, Jellicent's Cursed Body caused Cameron's Ferrothorn's Thunderbolt to be disabled. This allowed Marlon to use Mantine and have it use Psybeam and Bullet Seed to defeat Ferrothorn. Cameron pulled his headband and had an idea, as he sent Samurott. Samurott took advantage of the field and used Hydro Cannon to badly damage Mantine and Aqua Jet to push it out of the water. With Razor Shell, Samurott blocked Mantine's Wing Attack and defeated it. Thus, Cameron won his eight badge, the Wave Badge. Cameron was happy he would be able to participate in the Unova League and bid his friends farewell.[2]

After registering for the Pokémon League, Ash and all of his friends came across a tent. There, they encountered Cameron and his Riolu. Cameron told them that he has been camping out for three days, unaware he has to register. An announcement stated that registration is over - Ash and Cameron rush to the registration desk, where they managed to persuade Nurse Joy to let him participate in the Unova League. Ash, however, was not surprised Cameron nearly did not register. Cameron stated he had brought "his secret weapon". After spending some time in the sauna, the following day, Cameron faced Kendric, sending his Ferrothorn against Kendrick's Eelektross. Eelektross managed to dodge Ferrothorn's Thunderbolt and hit it with Crush Claw attack.[3] Ferrothorn managed to execute Pin Missile in Eelektross' mouth. This caused Eelektross to faint and Cameron advanced to next round. He joined Iris and Cilan, by watching Ash's battle against Trip, wishing how Pikachu would able to counterattack against Serperior. After Ash won the round, he, Cameron and Stephan spent the evening in the sauna, commenting about the battles, before their Pokémon started fighting each other, due to a misunderstanding. The following day, Cameron battled Bianca. He used his Samurott to defeat Escavalier. Escavalier managed to protect itself by using Iron Defense, but Cameron had Samurott use Razor Shell and bang it on Escavalier's head, managing to defeat it rather quickly. Bianca sent Emboar, who was hit by Samurott's Hydro Cannon. Luckily for Bianca, Emboar used Attract, infatuating Samurott, who was easily defeated by Arm Thrust and Hammer Arm attacks. Cameron sent Riolu, who deflected Emboar's attacks, using its dextrous appearance. Emboar grabbed Riolu and tossed it away, then tried to defeat it with Flamethrower. Due to Copycat, Riolu used the same move against Emboar and hit its eyes. With Vacuum Wave, Riolu defeated Emboar, causing Cameron to win the round. This made Ash even more inspired to battle Cameron later on.[4]

Cameron managed to defeat another trainer and pass onto the next round. Cameron went to his friends and explained that night fireworks would be lit. To make sure to get the best spot, Cameron already prepared his tent with his Riolu, but a group of people, carrying Iris' Axew (who dropped its party hat), passed and destroyed his tent. Cameron set the tent once more, unaware he put the party hat on. Iris jumped and took the hat, then went off where Cameron pointed Axew was. However, Cameron was displeased his tent was ruined once more. Regardless, Cameron managed to watch the fireworks with his friends.[5] Cameron fought against a trainer in the next round. With his battle over, Cameron learned his following opponent would be Ash. Cameron, who was too excited for the match, actually camped out on the battlefield on which he would face Ash against. Ash visited Cameron, who wished Ash luck in the incoming battle and reminded him about the "secret weapon". The following day, Cameron was on the battlefield and sent his "secret weapon", a Hydreigon, against Ash.[6]

Cameron sent a Hydreigon, while Ash sent Boldore to the battle. Boldore got badly wounded by Hydreigon's attacks and managed to score some damage by hitting Hydreigon with Rock Smash, but got hurt even more by Hydreigon's Tri Attack. Boldore collided with Hydreigon, using Flash Cannon against Hydreigon's Dragon Pulse, but Hydreigon won the battle. Ash was impressed by Hydreigon and sent Oshawott, which made some of his friends comment Oshawott was just to tire Hydreigon out. Oshawott managed to hit Hydreigon with Aqua Jet, though Hydreigon retaliated with Dragon Pulse, overpowering Oshawott. Oshawott used Hydro Pump, making a direct hit on Hydreigon, who finished the battle with Double Hit and Dragon Rush. With his second Pokémon down, Ash sent Pignite, who, like other Pokémon, was also being hurt by Hydreigon's attacks. Fortunately, Pignite boosted its speed with Flame Charge. Pignite launched Fire Pledge, which Hydreigon managed to dodge. However, this distracted Hydreigon, who was quickly taken down by Flamethrower and Brick Break attacks. Cameron was surprised at Hydreigon's defeat and sent Ferrothorn. While Ferrothorn managed to hit Pignite with Pin Missile, it was quickly defeated by Pignite's Flamethrower and Flame Charge attacks. To counter Pignite, Cameron sent his ace, Samurott, whose Hydro Cannon and Aqua Jet knocked Pignite out. Pikachu was sent out, whose attacks were blocked by Samurott's Razor Shell and hit Pikachu with Hydro Cannon. Pikachu managed to dodge Samurott's Megahorn. Pikachu attempted to defeat Samurott with Electro Ball, but Samurott blocked the attack with Razor Shell, only to get defeated by Pikachu's Iron Tail. Cameron sent his new Pokémon, Swanna, who managed to hit Pikachu with Wing Attack before getting defeated. Cameron sent his last Pokémon, Riolu, realizing only then he could've caught a sixth Pokémon to use in the League. Ash switched Pikachu for Unfezant, who tried to hit Riolu, but constantly missed. Instead, Riolu reflected the attacks and defeated Unfezant with Circle Throw. Ash sent Snivy, who started clashing with Riolu. Riolu bashed Snivy into the wall by using Force Palm. Snivy was furious and bashed Riolu to the ground with Vine Whip. Riolu retaliated with Vacuum Wave, though Snivy dodged and retaliated with Leaf Storm. Taking a lot of damage, Riolu stood up and evolved into Lucario. This pleased Cameron and terrified Ash.[7]

Cameron was astounded by the evolution, for Lucario, who managed to counter Snivy's attacks and wound her with Force Palm. Snivy attempted to attack, but was defeated by Aura Sphere. Without any other Pokémon, Ash sent Pikachu, who managed to attack Lucario twice with Quick Attack. Lucario fired Aura Sphere, which collided with Pikachu's Electro Ball. Cameron commented it was exciting to battle with his rival in the Unova League tournament, especially with Ash. Lucario and Pikachu battled to the bitter end, clashing with each other. Pikachu used Iron Tail, though Lucario's Copycat allowed Lucario to use the same move on Pikachu. Pikachu used Electro Ball to deflect Lucario's Aura Sphere, but Aura Sphere attack pushed through and hit Pikachu, who was defeated by the blow. Cameron was happy he won and cheered with his Lucario. Cameron then turned to Ash and both trainers shook hands, since this was an honorable battle. Cameron then faced Virgil in the next round. However, Virgil managed to defeat all of Cameron's Pokémon but Lucario. Lucario attacked Virgil's Flareon, which was merely an illusion made by Double Team. Cameron was frustrated, since he had no strategy - and this caused Lucario to be defeated by Flareon's Fire Blast. After the Unova League was over, Cameron met up with his friends. Bianca carried too many Casteliacones and offered them to his friends, so Cameron and Lucario swallowed two pieces of the ice cream. After having the ice cream, Cameron bid his friends farewell and left with Lucario.[8]

Cameron and Lucario were seen in Best Wishes! ending theme. Cameron continued his journey with Lucario and trained even more. 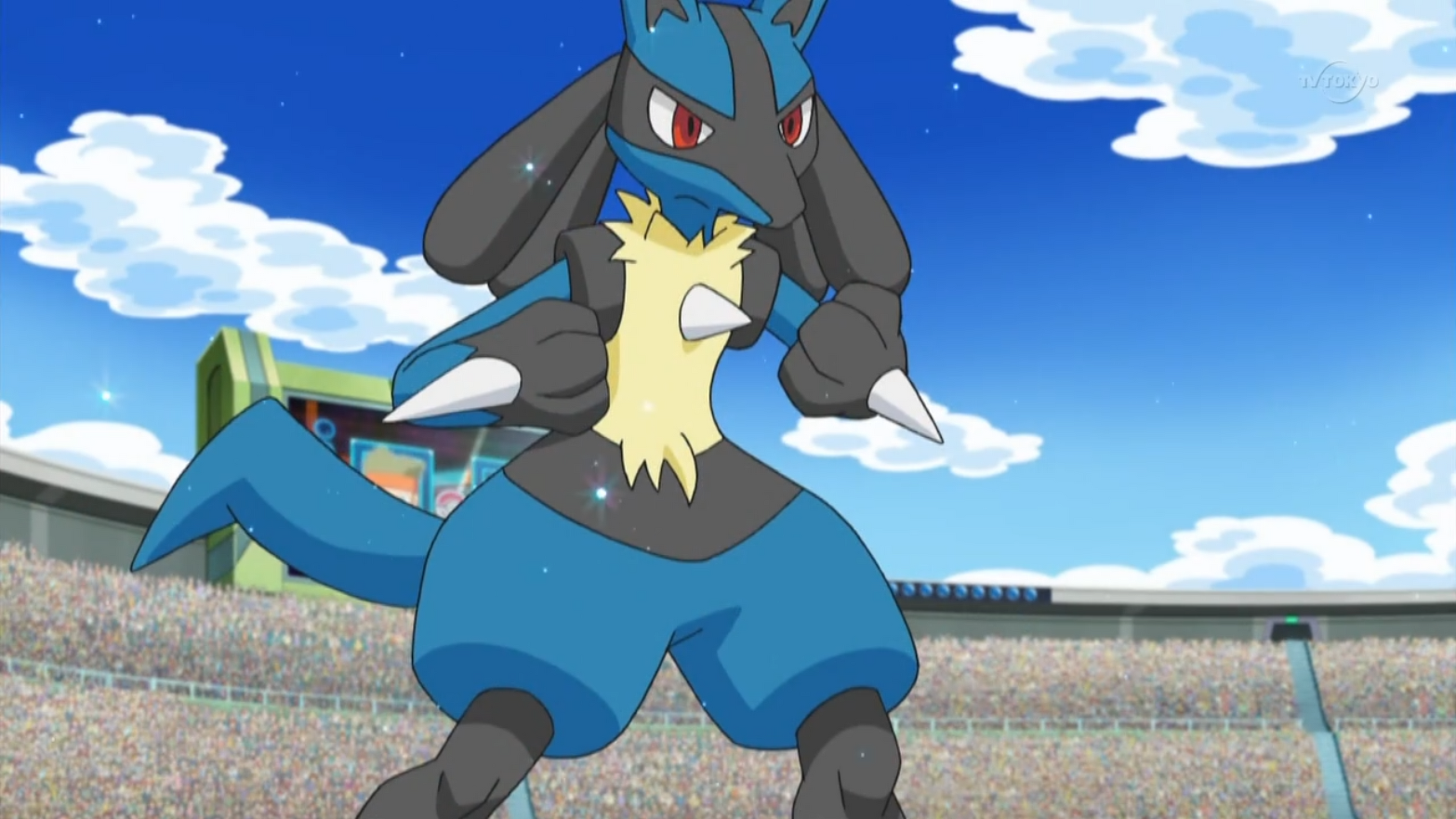 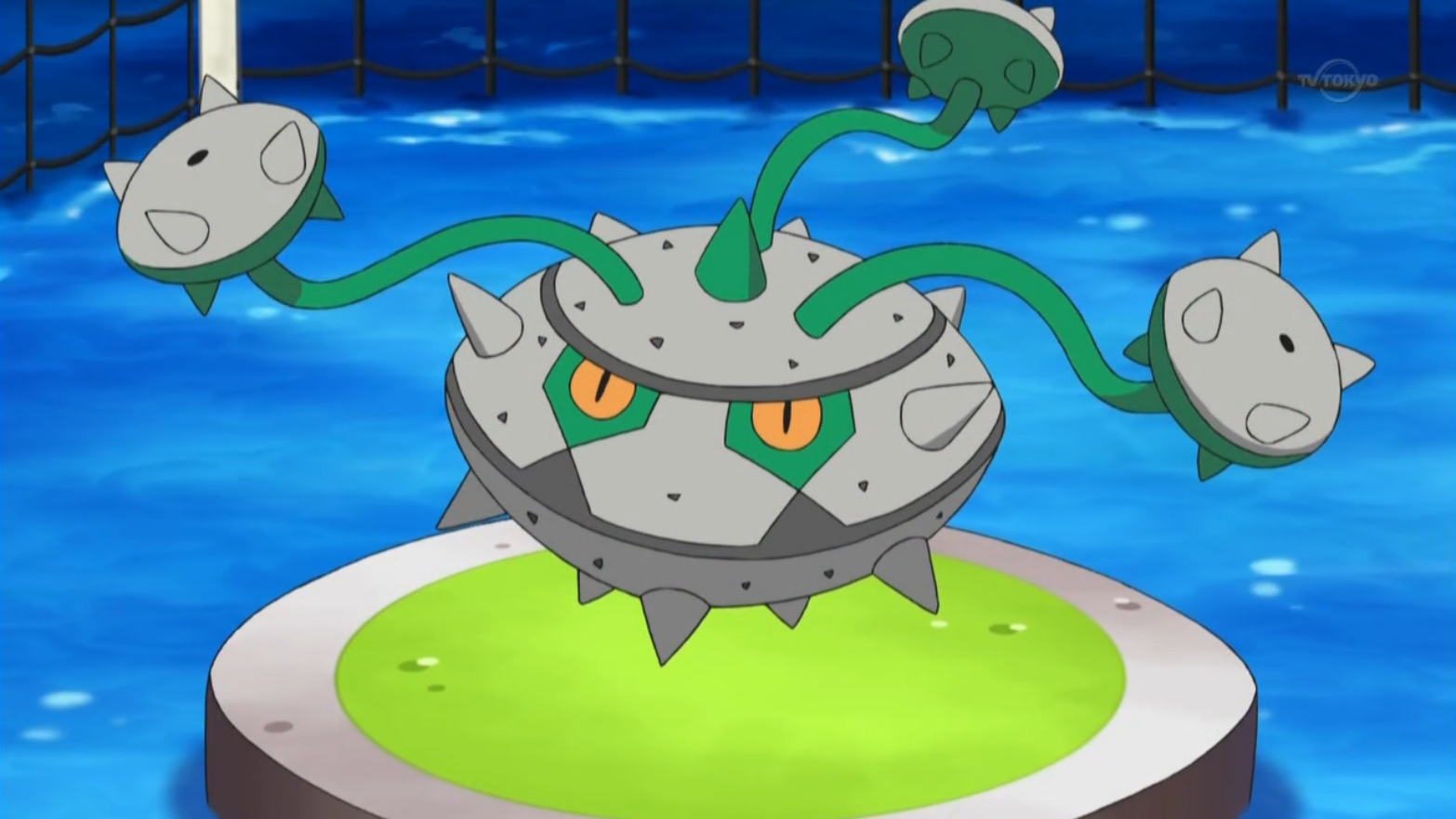 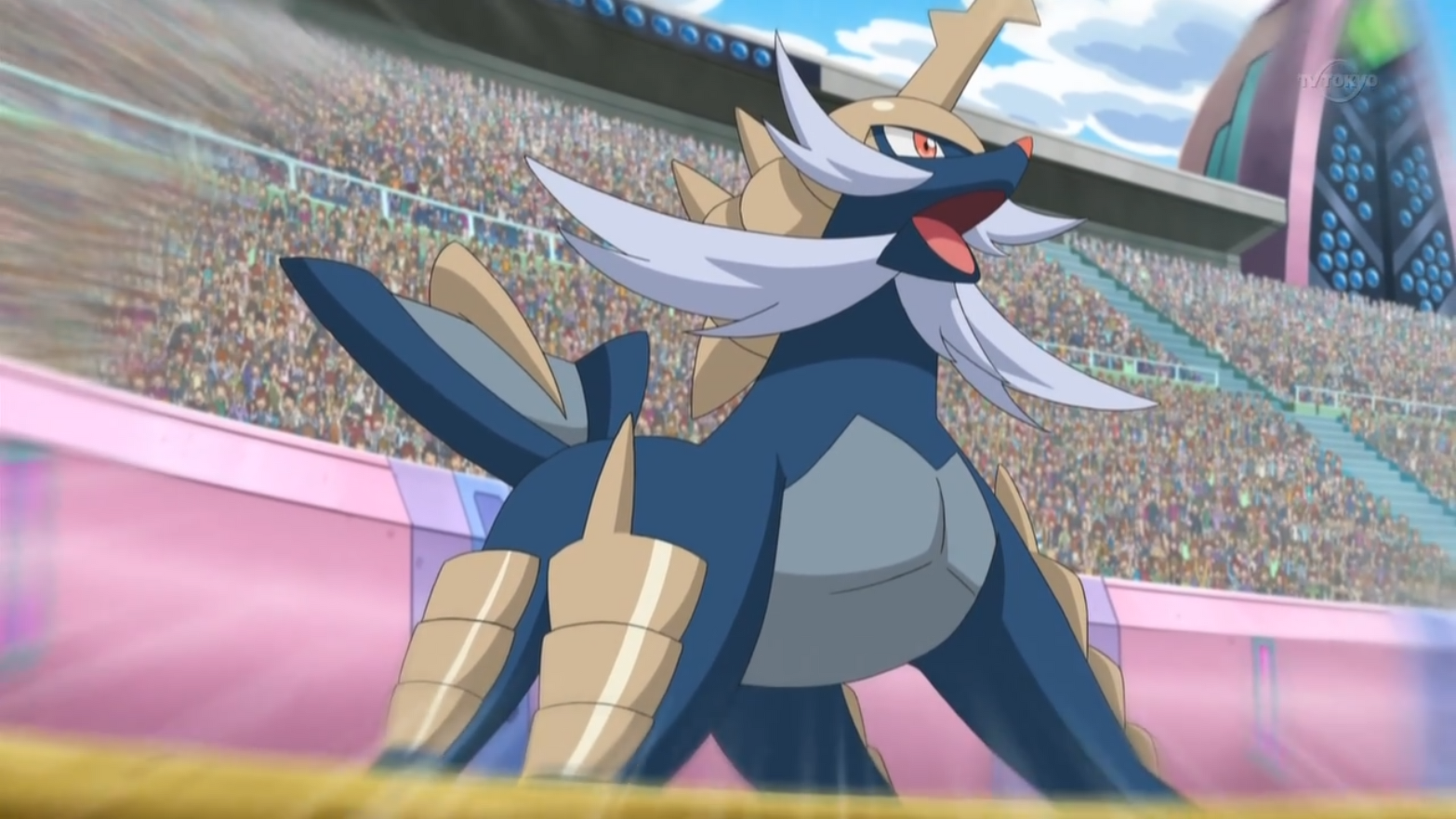 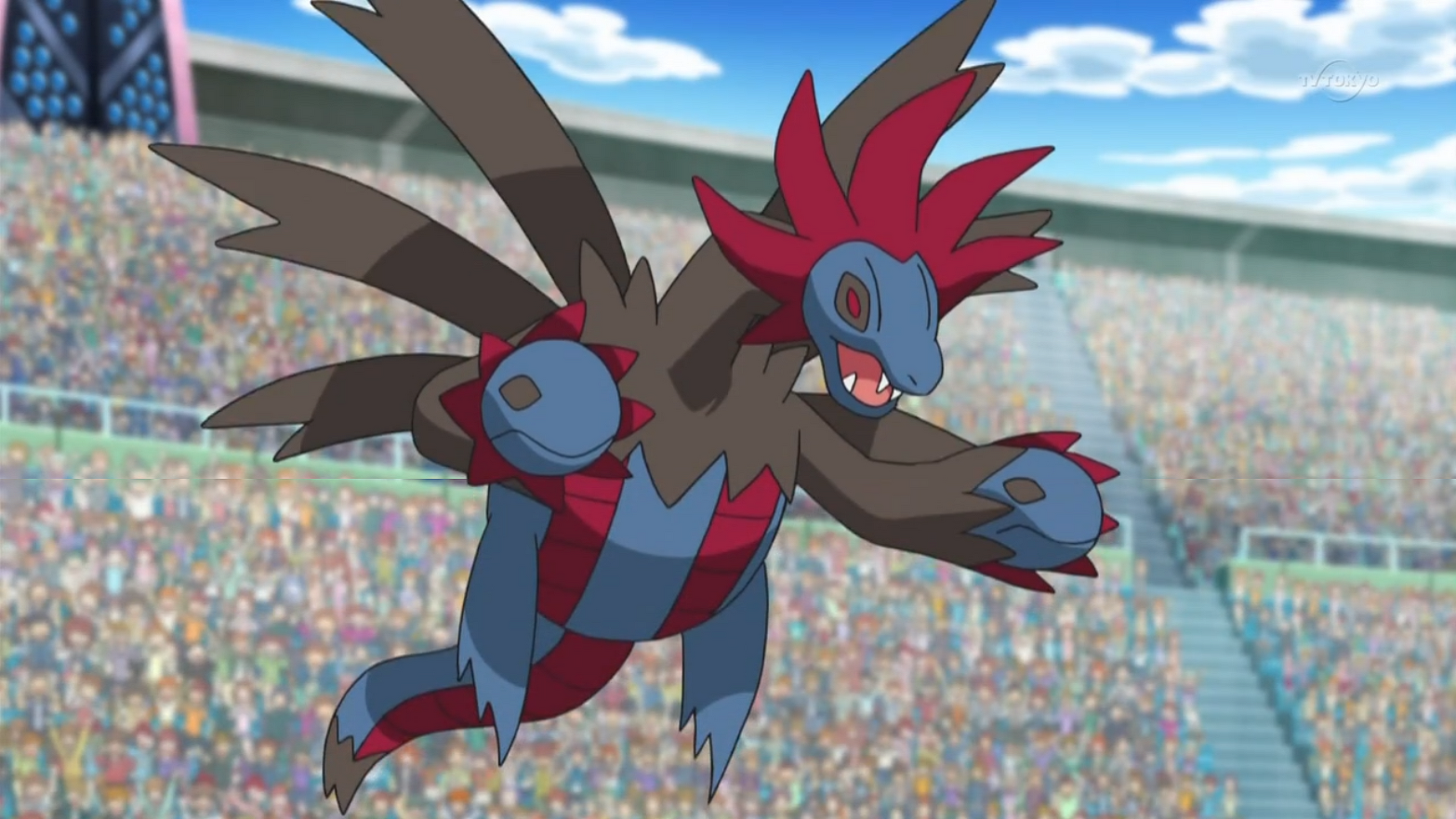 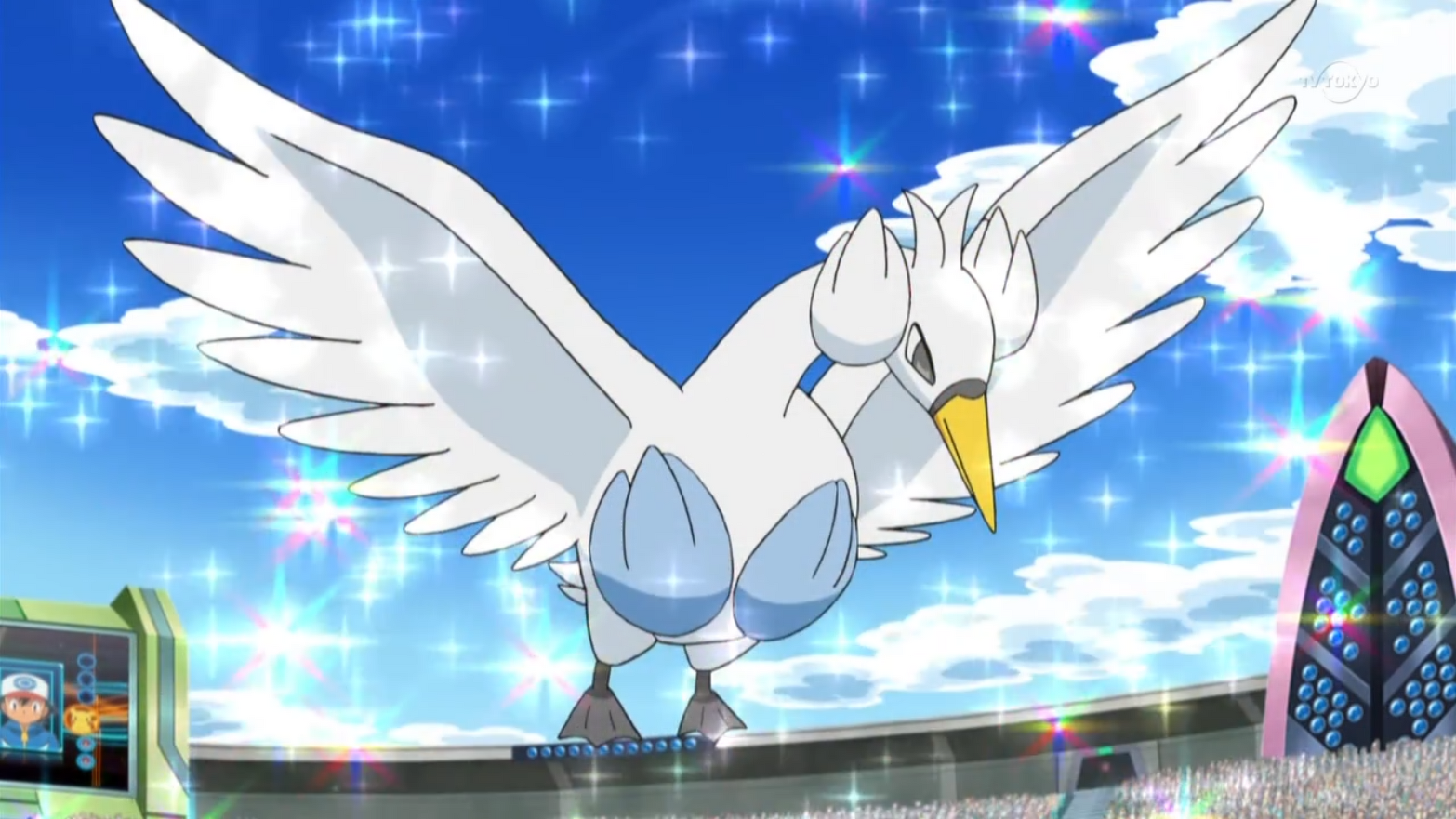