For the variant appearing in the games, see Byron.

Byron is a character appearing in Pokémon the Series: Diamond and Pearl, who is the Gym Leader of Canalave City, was the former Gym Leader of Oreburgh City in the Sinnoh region, with his son, Roark, taking over the reigns in Oreburgh City.

Byron is a muscular man that has maroon hair and beard, and wears a white tank top. Around his neck, he wears a very dark brown cape. He also wears white gloves with gold cuffs. His pants are grey and rugged, with pockets on either side at the top. There is also a gold stripe above each knee. He always carries around a shovel and wears a black belt and boots.

Years ago, Byron was once the Gym Leader of Oreburgh City. He used to spend time with his son, Roark, who had once found a fossil and gave it to his father.

Byron had left his family to become the Gym Leader of Canalave as he was more interested in fossils on Iron Island, leaving his former position to Roark. However, Byron still kept Roark's fossil as a remainder of his family.[1]

Roark went to Canalave City to confront Byron, because of Byron's wedding anniversary with Roark's mother. However, the two started aruging about who was the better expert on fossils. As the heroes arrived, Byron greeted them, but stated it was not a good time to take challenges. The heroes observed Byron's fossil collection, to which he showed them Anorith's fossil, which was much larger than expected. Roark continued arguing with Byron about whose fossil Pokémon was stronger, and on Brock's propsoal, this escalated into a battle, where Byron's Bastiodon faced Roark's Rampardos. Roark apologized to Ash for having him wait for his challenge against Byron, to which let him have this battle. Both sides promised they wouldn't go easy on each other, as the battle started.

While Bastiodon protected itself with Iron Defense, Ramprados charged with Zen Headbutt, seemingly making it look as the two sides were evently powerful. Byron was not pleased that Roark called himself a Gym Leader with moves like that, as Rampardos went on offense. As Rampardos used Flamethrower to collide with Bastiodon's Flash Cannon, an alarm was triggered, for Team Rocket attempted to steal fossils. They found a hole in his room, for the thieves dug it out to steal the fossils. Going through the tunnel, they encountered Team Rocket, where Byron and Roark sent Bastiodon and Rampardos to battle them. Bastiodon shielded Rampardos, as the latter attacked Team Rocket's machine with Head Smash. To defeat them, Rampardos and Bastiodon carved holes in the machine, letting Ash's Pikachu use Thunderbolt on the holes to blast Team Rocket off.

As Byron and Roark went to secure the fossils, the latter noticed a fossil that he gave to his father. Seeing that Byron still kept it, Roark noted that Byron still cared for him. With the matter settled, Byron decided to take on Ash's challenge tomorrow. He promised that his son would be the referee, and advised Ash to prepare himself for the upcoming battle.[1]

As the Gym Battle began, Byron made it clear that he preferred defense, but Ash would have trouble for obtaining his badge. Byron sent Bronzong against Ash's Chimchar. Bronzor's Heatproof Ability and Rain Dance move reduced damage from Chimchar's attacks, before retaliating with Gyro Ball. However, Chimchar's Flame Wheel defeated Bronzor, forcing Byron to send Steelix next against Ash's Buizel. Buizel went to use Water Gun, but was countered by Steelix's Screech, much like Roark's Onix had used the move against Ash in the Gym Battle. After defeating Buizel with Iron Tail, Steelix faced Ash's Chimchar. Chimchar fired a Flamethrower before using Dig. Steelix slammed the ground to prevent Chimchar's Dig and went to use Bind. However, due to the holes lying around, it collapsed and was defeated by its Flame Wheel.

Byron sent Bastiodon as his final Pokémon. Bastiodon was sturdy enough, using Iron Defense to endure Chimchar's Flamethrower attack. It retaliated with Metal Burst, which defeated Chimchar. Ash sent Gliscor as his final Pokémon, who attempted to get behind Bastiodon. However, Bastiodon used Iron Defense and bounced Gliscor away. Gliscor attempted to use Fire Fang behind Bastiodon, but was hit by Flash Cannon. After clashing with each other, Gliscor managed to burn Bastiodon with Fire Fang. Bastiodon released itself from Gliscor and fired Flash Cannon, to which Gliscor dodged. It hid behind a rock, which Bastiodon shattered with Iron Head. Gliscor used the moment to distract Bastiodon with Sand Attack and defeat it with Fire Fang. Byron lost, but applauded Ash and gave him the Mine Badge.[2]

Byron's Gym Battle, to earn the Mine Badge, was remembered by Ash, Dawn and Brock, as they were going to Snowpoint City.[3]

Byron also appeared in the ending scene of the 13th Pokémon movie, along with his Bastidon.[4] 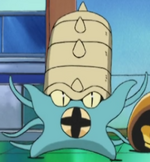 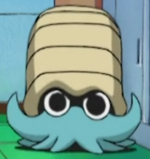