For the variant appearing in the games, see Byron.

A Big Stink Over Stunky

Byron is a tall and very muscular man with big muscles and abs. Byron has a burgundy or brown hair and beard and had black eyes. He wore a muscle gray or white tank top, white gloves, grey shredded work pants, boots, brown cape and carries a shovel.

Byron is a determined, but hot-headed man. He's a type of person that attacks first, and asks questions later. He's prideful of his son, who helps him, but also advises him to keep a cool head.

Roark, who grew up with Rampardos ever since it was an egg, decided to become a Gym Leader. Byron eventually admitted that his son grew up faster than he had thought.[1] Byron often visited Iron Island, where he was training.[2] He had a house at the island, where he kept a photo of himself and his son.[3] Byron was a friend with the captain from Canalave City, who came to Sinnoh region. He also introduced a woman to the captain, who eventually became the captain's wife.[4] Byron was also a friend to Riley from Iron Island.[5]

Byron noticed many strange people - members of Team Galactic - lurking around the Canalave City's library, only to read ancient books. It made Byron alerted of their presence.[6] Thus, six months ago, he called his son, Roark, from Oreburgh City, to join him in the investigation. However, the grunts left without making trouble. Thus, Roark went back to Oreburgh City. Before he left, Roark asked of his father not to be rash while continuing his investigation.[7]

Byron was in Canalave City with his Shieldon. He was talking on the phone to Roark, and was amused to hear that the latter lost a Gym match, and thought he needed more training. In addition, Byron mentioned the thing he spoke with Roark the other day.[8] Byron was walking around Canalave City when heard a man interrogating Mr. Berlitz, who paid the ransom fee to free his daughter. Byron stepped in to attack the grunt, and Professor Rowan came as well to find Mr. Berlitz. The grunt stated the commotion attracted the attention of too many people, and threw a cube that trapped Professor Rowan and Mr. Berlitz in a cage. As the grunt retreated, Byron took the cage to his Gym, to find a way to open it, but found no solution.[7]

Byron was at his Gym, when he saw Diamond, Pearl and Platinum coming to him. Byron suspected them to be his enemies, considering they came to the Gym very early, and had Bronzong attack them. Platinum had her Empoleon and Ponyta fight them off, thinking Byron captured her father and Professor Rowan. When Ponyta emitted fire, a part of the curtain was burned off, revealing Professor Rowan and Mr. Berlitz in a cage, behind Byron.[6] Byron believed the trio was still his enemies, though his two Bronzong were defeated by Platinum's Ponyta. Suddenly, he heard that Platinum was actually the daughter of Mr. Berlitz.

Missy used a shovel to open the cage, but Byron warned her that may have unforeseen consequences, while Platinum, Pearl and Diamond surrounded him. Byron, who realized he shouldn't have been rash, and was even warned by his son, explained he was Platinum's ally, and showed the Mine Badge, proving he was the Gym Leader. He noticed his Shieldon took Platinum's scarf, and noted this all could've been avoided if Shieldon obeyed him and showed him the scarf, which had Gym Badges pinned to it. Byron placed his badge, and explained the events that led to Professor Rowan and Mr. Berlitz being captured. Byron admitted he couldn't hear their voices, but suddenly, the group heard Mr. Berlitz talking, which made him believe the cage's power decreased over time.[7]

When Platinum was feeling down, Byron visited her, and told her that Mr. Berlitz and Professor Rowan didn't want her to continue the journey, as long as the enemy roamed around, and as long as she didn't have professional bodyguards. In fact, he announced Platinum would have to return to Sandgem Town, where she'd stay with her family, protected from the dangers. While he was at the Gym, Byron, along with Diamond and Pearl, became shocked to see that Rowan and Mr. Berlitz's cage was opened. The next day, Byron waited for others for Platinum to come down. He asked if the boys would greet her, but they admitted they hurt Platinum too much, and didn't deserve that. Suddenly, Platinum arrived, and explained while she respected everyone's opinions, she announced that she would defend Sinnoh region, for Team Galactic would use the Galactic Bomb to blow up the lakes.[9]

Byron became shocked with the revelation. However, he supported Platinum, and had Bronzong attack her. Platinum defended herself, and Byron showed his point to Mr. Berlitz that she was strong already, and earned his Mine Badge already. He explained he didn't call the police when the grunt captured Professor Rowan and Mr. Berlitz, since they were powerless before such a strong organization, though he considered interpol could come instead. Moreover, Byron pointed out she did earn six badges in 25 days, which was much faster than the challenge to earn eight badges in eighty days from Hoenn. Finally, he admitted that he thought of his son, Roark, as he grew up much faster than Byron anticipated, and soon became the Gym Leader, too.[1] Byron had Diamond go to Lake Verity, Pearl to Lake Valor and Platinum to Lake Acuity.[10]

As the group planned to split up and defend the lakes, Byron pulled Diamond away. He noted that while Platinum was knowledgeable about battles, and Platinum could predict the enemy's moves, he didn't see Diamond's battling spirit. Since his Shieldon became fond of Diamond, Byron let him keep it, but also gave Diamond a letter to give to the captain, as he would be taken to a special place, as a tutor would train him.[1] Before Diamond departed, Byron told him once his instructor deemed Diamond worthy to pass the exam, to go into his house and find an item, then give it to Shieldon.[3] Byron eventually called the Gym Leaders, including Candice, and warned them about the threat in Sinnoh region: Team Galactic.[11] He also worked on a project with the Underground Man and Roark, to expand the underground series of tunnels that connected the cities, where the Gym Leaders were. The goal was to track Team Galactic's activities, while keeping their activities hidden.[12]

Riley called Byron on the phone, and explained Diamond was a determined, hard-working kid, who needed more practice, and decided to give him the graduation exam. Byron was pleased with the progress, and said he was counting on them.[13] Byron contacted Volkner, and told him to face a terrifying opponent, whom neither Candice nor Maylene could defeat, which sparked an interest in Volkner to lend the two Gym Leaders some strength.[14] Byron went through the underground tunnels, which led to Mt. Coronet. He proudly announced to the enemy, Team Galactic, how they evaded their security, and was how the Gym Leaders managed to arrive to the summit to confront them. While the battle went under way, Byron saved a Cherubi. He healed it with a potion and sent it back into the fight. While he was pleased that this tactic was working, he was still concerned over the two Legendary Pokémon, Dialga and Palkia, whom Cyrus summoned.[12]

Byron felt the impact of the two Legendary Pokémon. He noticed Professor Rowan and Mr. Berlitz arriving, who thought they hindered the Gym Leaders. Byron denied, for their knowledge about the Legendary Pokémon would be useful in the fight. The two analyzed the situation, and concluded that Dialga and Palkia needed to stop fighting, so Byron assumed Cyrus had to be defeated. As the space and time was being warped, Byron had the Gym Leaders descend to the tunnels, where Professor Rowan explained what they needed to do.[15] As Charon, Team Galactic's scientist, tried to escape, he was stopped by Byron, the Underground Man, Mr. Berlitz and Professor Rowan. Rowan and Mr. Berlitz heard Charon muttering about some data, and wanted to interrogate him for that. Byron took his device and fiddled with it, causing gigantic tentacles to emerge and pull Dialga, Palkia and Cyrus through the hole, while Charon escaped.[16]

Looker and Platinum remembered Byron, due to his powerful status, for he was connected to the rest of the Gym Leaders, as well as the Elite Four and Frontier Brains of Sinnoh region.[17]

Byron awaited the Gym Leaders, who had recovered, with open arms, pleased that they were okay.[18] 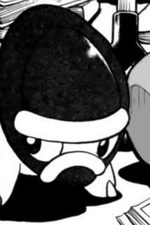