The Man with the Steel Body!

Byron specializes in Steel-type Pokémon and holds the Mine Badge for the trainers that can defeat him.

Bold, dynamic yet wise given his age. Byron is a hearty trainer with tendency to value defense more over offense when it comes to battling and his Pokémon. Carrying a spade may suggest, Byron isn't a stranger to manual labor most likely digging or mining.

Byron first appeared in the Diamond and Pearl games as the Gym Leader of Canalave City. Upon defeating him, Byron will give the player the Mine Badge and TM91, which contains (Flash Cannon).

After defeating the regional Elite Four in Diamond and Pearl, Byron can be found in the cabin on Iron Island. After talking to him, he will give the player a Metal Coat. 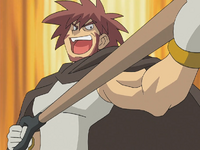 Byron in Pokémon the Series (anime) 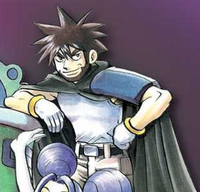