The Mystery of the Missing Fossil

Burgh is a character appearing in Pokémon Adventures, who is the Gym Leader of Castelia City in the Unova region.

This section, or a part of it, has been transcluded from Burgh; any changes involving it should be made there instead. /

Burgh, being an artist, makes different art pieces, like paintings or clothing. Like his Gym, covered in honey, Burgh's strategy is about trapping his opponents before pouncing on them.

Black researched that Cilan was a Gym Leader that he'd have to defeat on his way, to participate in the Pokémon League.[1] Virizion, Terrakion and Cobalion - the three Sacred Swords - traveled across the Unova region, and saw that the Gym Leaders had a strong bond with their Pokémon.[2]

While in artist's block in Nacrene City, Burgh received a call from Lenora, requesting his assistance in retrieving some items stolen from her museum. He agreed, finding Black and attracting his attention by having Whirlipede attack him. Black was annoyed and tried to ignore Burgh, who admitted Lenora called him to join him in the investigation. As they continued, Black commented that they should keep their distance, due to Burgh's Venipede's fear of bird Pokémon like his Brav, who could get poisoned by Venipede. Burgh noted Black was knowledgeable about Pokémon, to which Black stated he was friends with his Pokémon. Suddenly, the two stopped, as Black saw the missing skeleton and the other items from the museum. Burgh went to inspect the items, but got attacked by the animated stolen skeleton, which pounced on Burgh (manhandling him), grabbing him in its talons (and giving him inspiration), and found out Team Plasma were the ones that stole the items.

Black used Burgh's Whirlipede to find the Cofagrigus controlling the skeleton, and fight it. Seeing that the Cofafrigus is trying to retreat, Burgh ordered Whirlipede to use Pursuit on it, knockng it out and freeing Burgh from the skeleton's grip. After Team Plasma retreated, Burgh realized that Black used Burgh's help so that he didn't have to reveal his strategies to Burgh, admitting that he knew from the start that Burgh is the Gym Leader of Castelia. Burgh was amused at the deception and promised not to go easy on Black during their Gym Battle. He also thought of Gorm's words about heroes, making the connection to Reshiram and Zekrom.[1] Using the inspiration he had gained in Nacrene, Burgh made a new masterpiece, pulling out of his slump. A man at the Studio Castelia that wanted to buy the painting was quite amazed by the painting. However, Iris arrived, informing Burgh that a challenger arrived at his gym. Burgh asked for her honest opinion, but was devastated by her frank criticism: the painting was quite unpolished and it looked like Burgh had changed his style.

The buyer had Iris cheer him up, as she asked him if he was wearing a new honey-scented cologne. Burgh happily denied, as he had redesigned his gym with a honey maze. Burgh, remembering Black's appointment for a battle, went to the gym, which made Iris and the buyer happy that Burgh cheered up. Burgh went to the Gym, where Black was waiting for him. Burgh apologized, but Black showed him to his Gym. Black noticed the Gym was redecorated as a maze, and had to pass it to find Burgh at the other end. Burgh was impressed by Black's knowledge, and started bragging about his masterpiece: a maze made out of honey walls. However, Black simply got through the walls, which made Burgh remark that he was in a rush. When Black encountered him on the battlefield, Burgh sent out Whirlipede, who poisoned Braviary before Burgh returned him; Burgh's Dwebble proceeded to knock Braviary out with Smack Down. When Black sent Galvantula, Burgh suspected something was off, and swapped Dwebble with Leavanny.[3]

Using Leavanny's superior silk to defeat Galvantula, Burgh gained the advantage, but Galvantula poisoned Leavanny, who quickly fainted. Burgh sent Dwebble to face Tepig, and Dwebble's Smack Down dealt lots of damage to him. As Dwebble went to finish Tepig off, Burgh proclaimed his victory. However, Tep evolved and shattered the rock, whose shards fell on Dwebble, defeating it. Burgh hated that he lost, but he admitted his defeat, and gave Black the Insect Badge. Suddenly, the group was approached by Iris, who had Fraxure carry Bianca. Black was shocked to see Bianca being assaulted, to which Iris stated this was another case of an attack. She showed Bianca's empty Poké Ball, and explained her Pokémon must've been kidnapped. Burgh claimed Iris had no proof of that, which made Iris angry that Burgh was so unperceptive as an artist.

To track them down, Black had Musha empty his mind, which startled Iris. Black had Tep smell Bianca, which made him sneeze, and follow that scent. The group went to the building opposite to the Gym, which was locked. As Burgh's Dwebble crashed the door, the group started to sneeze as they were approached by an Amoonguss, who was holding Bianca's Litwick. As the latter started attacking, Black sent Tep to defeat Amoonguss, who released Litwick. The group went to the rooftop of the building, where they found Team Plasma grunts, led by Bronius. Bronius gave them a cryptic message about a misunderstood hero, who would stand beside a dragon. With Team Plasma forces gone, the group returned the Pokémon that the organization had "liberated" to their trainers.[4]

When White told Black that N was the king of Team Plasma, Black deduced that N was as much criminal as the grunts, whom they, Burgh and Iris confronted at the Castelia City.[5] Lenora called other Gym Leaders, including Burgh, to meet her at Nacrene City museum: she displayed the Dark Stone so the enemy would take the bait, and the Gym Leaders would be ready to fight them.[6] Burgh waited with the other Gym Leaders in the airplane. Burgh was glad to see Black having joined them, too, and confessed his anger when he saw Team Plasma having established their base in front of his Gym. Clay explained they came here for the concern about Team Plasma, and they were to join Lenora at Nacrene City. However, Skyla took Black to her Gym to test him, leaving others behind. Elesa and Burgh smiled, seeing Skyla was a bit reckless.[7] Burgh waited with the other Gym Leaders in the airplane. Clay became mad that Skyla ditched them, to which Burgh wanted to calm him down. A moment later, Skyla joined the Gym Leaders at the airplane, and took them to Nacrene City. There, Burgh and others joined Lenora in the fight against the Shadow Triad, who were attempting to steal the Dark Stone.[8]

Burgh faced the Shadow Triad, and teamed up with Brycen to confront one of the intruders. While Burgh and his Whirlipede were quickly overwhelmed, he observed Brycen fighting; despite his Cryogonal getting hit by the Fire-type attack, it simply evaporated. He noticed how amazing Brycen was, as his tactics allowed him to capture the Shadow Triad with an icy chain. The Gym Leaders confronted the Shadow Triad, and demanded of them to take them to Team Plasma's king. However, the Shadow Triad called upon the Weather trio: Tornadus, Thundurus and Landorus, who emitted a giant surge of energy, forming a whirlwind that engulfed the Gym Leaders. To save the Gym Leaders, Black went to attack, and his Nite evolved.[9] However, Black failed to hit Tornadus, Thundurus and Landorus, who blew him away. Without further ado, Skyla, Clay, Burgh, Elesa, Lenora and Hawes were taken away, while Brycen made a dummy ice sculpture of himself to escape their capture.[10] Brycen was searching far and wide to find any traces of Team Plasma, and wondered where the Gym Leaders, like Burgh, could have been taken to.[11]

When Iris encountered Black again, she noted that his Brav was missing, who had taken her and Burgh atop Team Plasma's building in Castelia City.[12] When the Pokémon League began, Caitlin used her powers, and detected that the Gym Leaders were in a dark place. She conveyed their message: "HELP".[13] Caitlin went to Black, who was having a battle against Drayden. Caitlin interrupted the battle to have Gothitelle touch Black's head, linking his mind with the Gym Leaders, who were trapped in a strange dark place. Skyla, Burgh, Elesa, Clay, Lenora and Hawes appeared in Black's mind, who asked of him not to be gloomy, and not to give up. They apologized for putting a lot of strain on Black, and have heard that Black's Musha had abandoned him. Black didn't want their condolences, believing Musha would've abandoned him sooner or later. Burgh reminded Black of the gamble whether to have Tepig evolve during their Gym Battle to defeat him. The Gym Leaders exclaimed that Black had defeated them all because he was listening to his Pokémon, and the answer was inside of him.[14]

Brycen, who heard the news about the missing Gym Leaders, suspected that their memories have been wiped out, for they could not remember where they were taken to.[15] As N's castle emerged from the ground, Ghetsis revealed that Burgh was crucified, along with the rest of the captured Gym Leaders.[16] The trainers, who fought to release the Gym Leaders, had Patrat chew off the ropes binding them. The Gym Leaders were released, and joined the fight against the Team Plasma Sages.[17] With the battle over, Burgh watched N departing away with Zekrom into the sunset.[18] 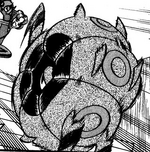 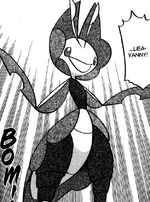