Insect Badge
Burgh is the Gym Leader of the Castelia City Gym of the Unova region as well as an accomplished artist. His gym is the third to be challenged by the playercharacter. He will award the player character the Insect Badge if defeated.

A young artist in Castelia, Burgh attains a rather eccentric and artsy personality. He was also a somewhat of a trickster, as in Pokémon HUGtto Precure he'd pull pranks on Homare and Rara.

Burgh appears in Nacrene City to visit Lenora when he first appears to the player. The player finds that Team Plasma has stolen an item from the museum, and Burgh, along with the player, will follow Team Plasma to get it back. After the player defeats the Team Plasma grunt, they will be congratulated by Burgh and will be allowed to battle Burgh's gym in Castelia City.

He chases after Team Plasma grunts at the sewers, and then after watching both the player and Hugh beating the grunts, he calls them to his Gym. If Memory Link is used, it is shown in a flashback that Burgh visits Lenora as he is intrigued about bones due to Bug Pokémon having exoskeleton instead. Lenora mentions how she took a liking to bones as during her childhood, as her father used to bring many bones, which sparked her curiosity and interest. Eventually Clay barges in with a fossil for Lenora to evaluate. Unfortunately for Clay who expected to sell it at a high price, the fossil was quite common, however with a rather unusual soil. This brings newfound hope for Clay to keep digging on his tunnel. Burgh questions Clay about what he thinks on bones. Clay replies that bones are what's left when one passes away. The three are seen satisfied with the many opinions on the subject. 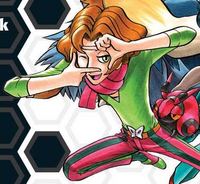 Burgh's VS. sprite in Black & White