Bunnelby is a small, gray, rabbit-like Pokémon. It has large, gray, brown-tipped ears with pinkish fur on the inside. It has a large, gray head and large eyes with white sclera and black pupils. It has a small pink nose and gray fur that sticks out on the cheeks, along with large white teeth. Its neck is surrounded by brown fur. It has a gray body with a gray tail and small brown spots on its hind legs. Its front paws are completely gray, while its hind paws are gray with brown toes.

Bunnelby are energetic and industrious Pokémon. They use their large ears to dig burrows, shovel dirt, and chop trees. They will dig the whole night through.

Bunnelby can be evolved to a Diggersby at level 20.

Bunnelby first appeared in Kalos, Where Dreams and Adventures Begin! under the ownership of Clemont.

Bunnelby is based on a rabbit. Its habit of digging with its ears may be based on excavator machines. Its Shiny coloration with its white fur and red eyes is based on an albino rabbit.

Bunnelby comes from bunny and tunnel.

Its Japanese name, Horubii, comes from 掘る (horu, to dig), hole, and bunny. 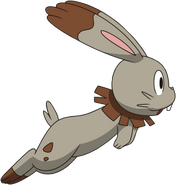 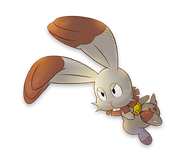 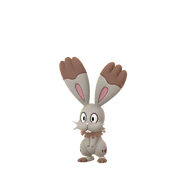 Add a photo to this gallery
← Greninja | Bunnelby | Diggersby →
Retrieved from "https://pokemon.fandom.com/wiki/Bunnelby?oldid=1378967"
Community content is available under CC-BY-SA unless otherwise noted.