Pokémon Wiki
Register
Don't have an account?
Sign In
Advertisement
in: Male characters, Pokémon the Series: Gold and Silver characters

For the variant appearing in the games, see Bugsy.

Gettin' the Bugs Out

Bugsy is a character appearing in Pokémon the Series: Gold and Silver, who is the Gym Leader of Azalea Town in the Johto region.

Bugsy is an androgynous-looking boy with purple hair and purple eyes. He is sometimes seen with a net. Bugsy wears green shorts, suspended by a belt and has brown dress shoes. He also wears a green collared shirt and white ankle socks.

Bugsy is a Gym Leader, who likes Bug-type Pokémon, whom he has studied and believes to "rule them all". In battle, Bugsy uses unusual tactics, both defensive and offensive, to confuse his opponent and take them down.

Bugsy was standing on a tree, marking how Misty was ignorant of Bug-type Pokémon, due to her fear of bugs. After acknowledging Ash's challenge, he sent a Spinarak against Ash's Cyndaquil. Spinarak managed to lower its speed with String Shot, and when it attempted to hit Cyndaquil with another Poison Sting, Ash swapped it with Chikorita. Spinarak used the string to move around, but Chikorita managed to defeat it with a Sweet Scent and Tackle combo. Next, Bugsy sent Metapod, who endured the attacks with Harden and defeated Chikorita with Tackle.

Ash sent Pikachu, who also got tackled, but defeated Metapod with Thunderbolt. Bugsy admitted it was some time when he was defeated in the second round, as he sent Scyther. Scyther evaded Pikachu's Thunderbolt with Double Team and defeated it with Fury Cutter. Ash sent Cyndaquil back, who dodged Scyther's attacks, but blocked Cyndaquil's Flamethrower by spinning and using Swords Dance. Fortunately, Cyndaquil struck Scyther from atop the Gym with Flamethrower and defeated it. Thus, Ash won the Hive Badge, as Bugsy did not expect his Scyther's strategy to have been beaten. Regardless, Bugsy welcomed Ash and promised to battle him the next time they would meet.[1]

When Team Rocket stole Ash's badges, Ash was searching for the lost badges. He also remembered his battles with the Johto Gym Leaders, including Bugsy and his Scyther, as Ash and his Pokémon won those badges through hard effort.[2] 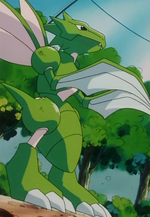 Bugsy from the Anime.

Bugsy throwing out a Poke Ball.