Bugsy in other languages

"I'm Bugsy! I never lose when it comes to Bug-type Pokémon. My research is going to make me an authority on Bug-type Pokémon! Let me demonstrate what I've learned from my studies."
— Bugsy, Pokémon HeartGold and SoulSilver

Bugsy (ツクシ Tsukushi) is the Gym Leader of the Azalea Town Gym. Beating him earns the player the Hive Badge. He specializes in using Bug-type Pokémon. The player character can challenge Bugsy only after Team Rocket is defeated in the Slowpoke Well.

Bugsy is a young boy with purple hair and eyes. He is almost always seen carrying a net. Bugsy wears green shorts, suspended by a belt and brown shoes.

His shirt has different shades of green and wears a neckerchief, and he wears yellow-striped knee socks.

Bugsy is a gym leader who loves his profession and the Bug-type Pokémon he trains, he claims that someday this type of Pokémon will conquer the world. His combat techniques are characterized by being unpredictable, but very effective and useful. 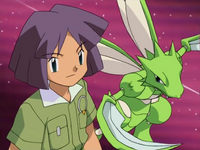 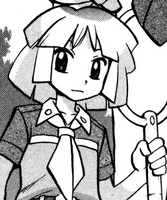 Bugsy's VS Sprite in HeartGold and SoulSilver

Bugsy's Battle VS Scene in Black 2 and White 2

A picture with Bugsy at the Poke park.
Community content is available under CC-BY-SA unless otherwise noted.
Advertisement