For the variant appearing in the games, see Brycen.

Guarding the Guardian of the Mountain!

Brycen is a character appearing in the Pokémon the Series: Black & White, who is the Gym Leader of Icirrus City in the Unova region.

Brycen is a muscular man with blue eyes and teal hair. He wears a blue mask around his eyes, with a "tail" with a purple ribbon. Brycen wears a blue mantle with white hexagonal features, which covers his left arm and torso. Brycen also wears black pants and azure shoes.

Brycen, despite his odd appearance, is a man with passion for extensive training, techniques he had used as an actor in the movies he was starring in. He also shares that passion during the battles, wanting to see the most out of it.

The name Brycen comes from "ice".

His Japanese name, Hachiku, is literally 淡竹 (hachiku, a type of bamboo species).

Brycen was a famous movie actor, who starred in many movies, some with his partner, Beartic. However, he had an accident in one of the last movies and quit, so he can train more with his Beartic, right from the start.

Brycen and his Beartic appeared when the heroes ran away from some falling boulders. Cilan recognized Brycen and Beartic as famous movie actors, though Brycen retired after his last movie, "Fists of Ice". Brycen suspected the fallen boulders were not by accident, suspecting there are hunters amidst. Ash and Krokorok were interested how Brycen and Beartic trained. Brycen and Beartic showed they could stand on their hands, leaping on boulders, crushing rocks and diving from a waterfall, which Ash and Krokorok failed to do. The weather became cloudy and Brycen noticed a light in the distance, suspecting something was wrong. They faced a hunter, who caught Volcarona, the guardian of these lands. Ash challenged the hunter, Rizzo, and if Rizzo lost, he'd had to release Volcarona. However, even after Ash defeated Rizzo's male Jellicent, Rizzo sent his female Jellicent, who combined its attacks with the male one. Brycen and Beartic confronted the hunter, having his Beartic endure the Hex attack and defeat them with Ice Punch. After Rizzo had been arrested, the heroes thanked Brycen for assistance and admitted they had to go to Icirrus City to let Ash challenge the Gym. Just then, Brycen admitted he was the Gym Leader of that town.[1]

The following day, Ash challenged Brycen to the Gym match. Brycen was inspired by Ash's determination, then sent his Vanillish to battle Krokorok. Cilan suspected Brycen did not use his Beartic for the start, for he wanted to use it for backup in the last battle. Vanillish managed to freeze Ash's Krokorok's tail and hit him with Mirror Shot. Ash swapped his Krokorok with Scraggy, who pulled its "pants" on to protect itself from Icicle Spear, then defeated Vanillish with Focus Blast and Headbutt. Brycen was impressed and sent Cryogonal, who dodged Focus Blast attack and defeated Scraggy with Aurora Beam. Ash then sent Pignite, who, despite getting hurt by Frost Breath, managed to knock out Cryogonal using Fire Pledge. Beartic was sent and countered Pignite's Flame Charge with Brine, then defeated him with Aerial Ace. Brycen expected Krokorok, who had distinctive disadvantage. Beartic used Icicle Crash to counter Krokorok's Stone Edge, but Krokorok collected the stones and started throwing them at Beartic, copying Bianca's strategy during the Donamite Tournament. Beartic was defeated, amazing Brycen, who sensed the passion coming from Ash and his Pokémon, giving the trainer the Freeze Badge. Brycen also suggested going to Opelucid City, though this startled Iris.[2]

Ash remembered battling the Unova Gym Leaders, including Brycen, the night before he entered the Unova League.[3] 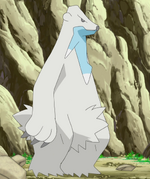