Bruxish use their spiritual power instead of radar to attack their prey. When they molar their teeth, other Pokémon will know that is a hint of danger and flee away.

Bruxish is based on a Picasso triggerfish (humuhumunukunukuapua'a in Hawaiian), the state fish of Hawaii, with it having similar bright colors and the same sharp teeth.

Bruxish might be a combination of bruxism, the act of gnashing teeth, and fish. 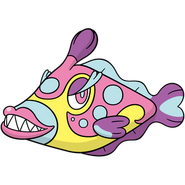 Add a photo to this gallery
← Mimikyu | Bruxish | Drampa →
Retrieved from "https://pokemon.fandom.com/wiki/Bruxish?oldid=1209432"
Community content is available under CC-BY-SA unless otherwise noted.