"I am Bruno of the Elite Four! Through rigorous training, people and Pokémon can become stronger without limit. I've lived and trained with my Fighting Pokémon! And that will never change! (Player)! We will grind you down with our superior power! Hoo hah!"
— Bruno, Pokémon Red, Blue, Yellow, LeafGreen and FireRed.

Bruno is tall and muscular man. He has long black hair, tied in a thick ponytail, which dangles down his back to his shoulder blades and longish thick sideburns. He has small dark eyes with prominent eyebrows, a small nose and a square jaw. He wears white trousers with a tattered waist and ankles that are held up by a black belt, shirtless and black wristbands on his wrists.

Stolid yet intimidating, Bruno is a character who represents his preferred type very accurately indeed. With great belief in his training, his impressive physique no doubt came from many years of training.

The name Bruno may come from "brutal" or "brawn".

His Japanese name, Shiba, could originate from しばく (shibaku, to strike). 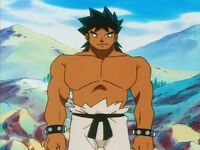 Bruno's VS sprite in Red & Blue

Bruno's VS sprite in Yellow

Bruno's VS sprite in FireRed & LeafGreen