Brock serves as the Gym Leader at the Pewter City Gym and holds the Boulder Badge for the trainers that defeat him in a Pokémon battle. In the Pokémon games, Brock specializes in and only uses Rock-type Pokémon.

Brock is a teenager with brown hair and his eyes naturally appear closed. In Red and Blue, he was shirtless and wears a pair of blue jeans and black shoes. In Yellow, Brock wears a red vest with a black T-shirt with white short sleeves, blue jeans, and sneakers. In Gold and Silver, he wears a long-sleeved orange shirt with black lining over a black v-neck shirt and green pants.

Brock, in personality, is quite determined, evident from his nickname "The Rock Solid Pokémon Trainer!"

Brock, in the main series Pokémon games, has always been featured as the Pewter City Gym Leader.

Brock's VS sprite in Red & Blue

Brock's VS sprite in Yellow

Brock's VS sprite in FireRed & LeafGreen 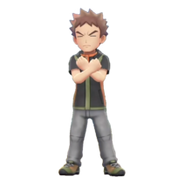 (Participating Pokémon picked randomly from the list, with Onix certain to be first.)

Brock in FireRed and LeafGreen

Brock in HeartGold and SoulSilver.

Concept art of Brock for Let's Go, Pikachu! and Let's Go, Eevee!
Add a photo to this gallery
Retrieved from "https://pokemon.fandom.com/wiki/Brock_(game)?oldid=1245470"
Community content is available under CC-BY-SA unless otherwise noted.