Breloom is a small, bipedal, lizard-like Pokémon. It has a green body and legs, with a light colored head and tail. On top of its head is a green, hat-like structure that resembles a mushroom cap. On either side of this cap are red orbs with black dots in the middle, resembling eyes. A small cluster of seeds is located on the tip of its tail and can be used in attacks. Its arms are not visible, as it tucks them in, leaving only two red claws on either hand visible. Despite this appearance, Breloom can extend his arms out to attack.

Breloom are also very strong for their size, and they are also extremely fast.

Breloom is the evolved form of Shroomish, which evolves into Breloom at level 23.

Breloom's first appearance was in the episode "A Shroomish Skirmish". In this episode, a group of Breloom attacked Ash and his friends for stealing food. Toward the episode's end, May's Torchic evolved into a Combusken and defeated the Breloom.

Kenny owns a Breloom that he used during many of his contests.

Breloom's name may be derived from "umbrella" and "mushroom". 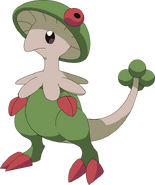 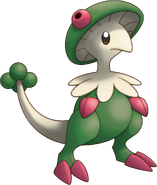