For the variant appearing in the games, see Brawly.

Brawly is a character appearing in Pokémon: Advanced, who is the Gym Leader of Dewford Town in the Hoenn region.

Brawly is a calm fighting-type trainer. Brawly's favorite pastime is surfing with his Pokémon, knowing they would all master balance that way. During his battles, Brawly uses the surfing techniques to deflect damages his Pokémon receive. Brawly also speaks in a slightly-off surfer language, most of the time. Brawly also admires nature and believes one should just "go with the flow", rather than trying to oppose the nature's forces.

When the heroes first encountered Brawly and Ash requested a Gym Battle with him, Brawly refused, under the surmise he did not want to miss the awesome waves since the conditions are perfect for big waves. Ash was persistent, even if Brawly continuously refused. Seeing Team Rocket have taken Pikachu, Brawly had Makuhita attack them to save Pikachu. As a result, Brawly agreed to give Ash a Gym Battle for the Knuckle Badge. At the Gym, Brawly sent his Machop and Ash his Taillow. However, despite Taillow's attempts, Machop simply absorbed the attacks and rolled away, taking no damage. Machop used Cross Chop and defeated Taillow, forcing Ash to use his Treecko instead. Though Treecko continued attacking, at one point, Machop was exhausted and was defeated by Treecko's Pound. Brawly sent his Makuhita, who, like Machop, also absorbed the attacks and did not receive any damage. Makuhita managed to inflict some damage to Treecko before evolving into Hariyama, and KOs Treecko with Knock Off. Brawly won the battle and advised Ash to go to the Pokémon Center. Later on, Brawly was surfing with his Hariyama, reminding it must balance one self during surfing. Ash approached Brawly, who advised Ash to train on the island some more, even by playing with nature. Ash took the advice, while Brawly continued surfing.[1]

Brawly stopped the match between Ash and Shauna, warning everyone about a hurricane, which was to come on the island. Brawly also wondered why Shauna was out here, and before Brock could even reply, Shauna closed Brock's mouth. Without further ado, everyone went to a cave Brawly told it would be their shelter, even letting some wild Pokémon accompany them. As they were walking on a steep path, Shauna did not want to hold hands with Brawly, since she lied about being Brawly's apprentice and his "girlfriend". However, she was forced to hold Brawly's hand and went to the cave, even letting Team Rocket accompany them. While sharing the fire's warmth, Brawly commented how the forces of nature are unpredictable and one cannot go against such forces, thinking it was wiser to just seek out shelter. The following day, everyone woke up and found out Team Rocket wanted to attack them, but Brawly sent Hariyama, who blasted them off. Before departing off, Brawly watched Shauna battling Ash. Despite her loss, Brawly decided to take Shauna as his apprentice. Ash asked Brawly for a rematch, a challenge Brawly accepted. Brawly showed them a path to an island, which was revealed after the sea level decreased.[2]

Before the gym match, Brawly showed his training room. There, he and the heroes encountered Team Rocket, who were blasted off by a geyser, since the sea blows out a jet stream from the holes. Brawly showed Ash the battlefield they would be battling on, formed of rocks and water. Brawly sent Machop, who battled against Ash's Treecko. Treecko managed to dodge the attacks and inflict some damage to Machop. However, Machop used the geyser to attack, but Ash recalled Treecko and sent out Corphish, who managed to knock out Machop with a Crabhammer. Brawly sent Hariyama, who managed to inflict some damage on Corphish via Arm Thrust. Corphish dived in the water, but Hariyama used Arm Thrust on the water, bringing Corphish out and defeating it. As his only Pokémon left, Ash sent Treecko, who attacked Hariyama's legs to weaken it. When both Pokémon are sent into the air via the geysers, Hariyama and Treecko exchanged their Knock Off and Pound attacks. In the end, Hariyama was defeated and Ash won his Knuckle Badge, with Brawly commending him on his tactics he used to defeat him.[3]

While fishing out for a Whiscash, nicknamed Nero, who stole his Badge Case, Ash recalled battling Brawly and his Hariyama.[4]

Before arriving to Slateport City for May's Grand Festival, she and Ash remembered their past adventures so far. Ash recalled facing Brawly and his Makuhita, who were interested in surfing. During the battle, Makuhita evolved into Hariyama and defeated Treecko. However, Ash trained Treecko well and defeated Hariyama in the rematch, which earned him the Knuckle Badge.[5]

Scott mentioned that Greta was inspired by Brawly and Chuck when the heroes wondered what Pokémon Greta used.[6] 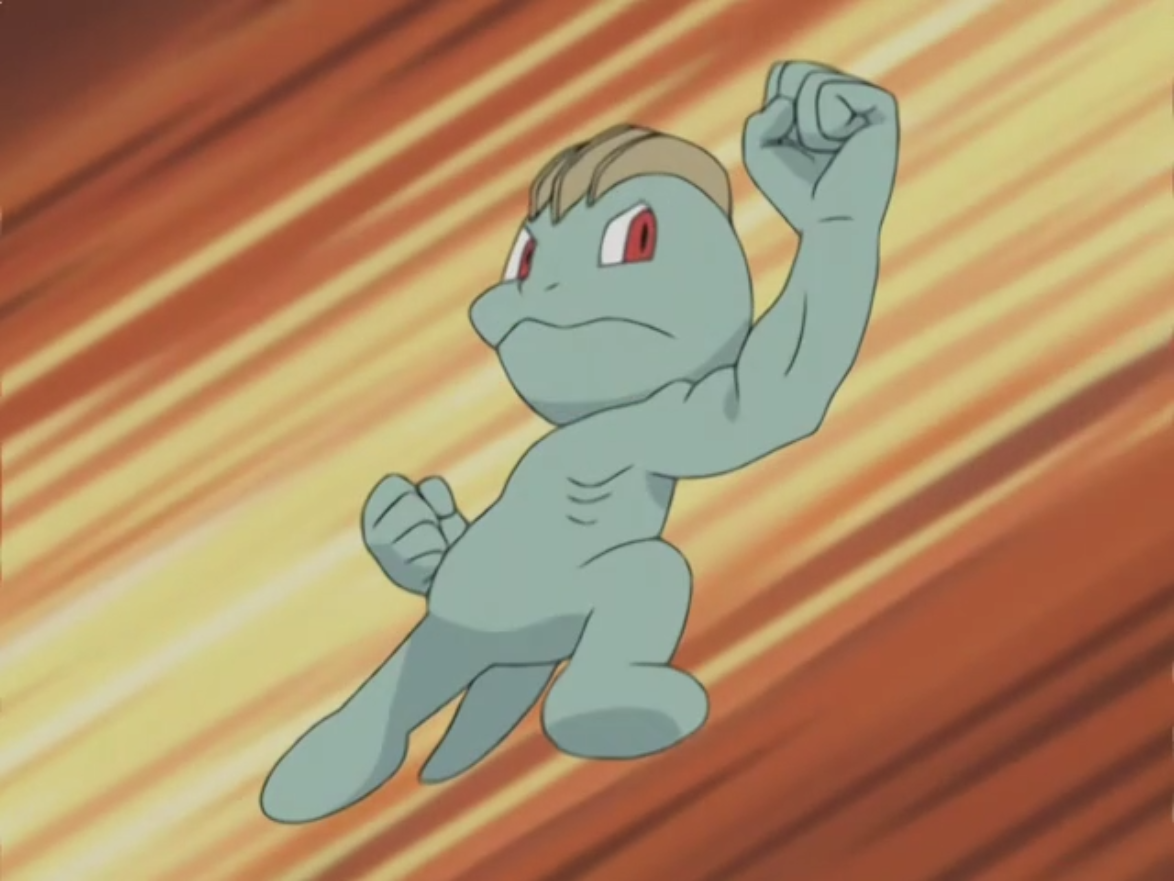 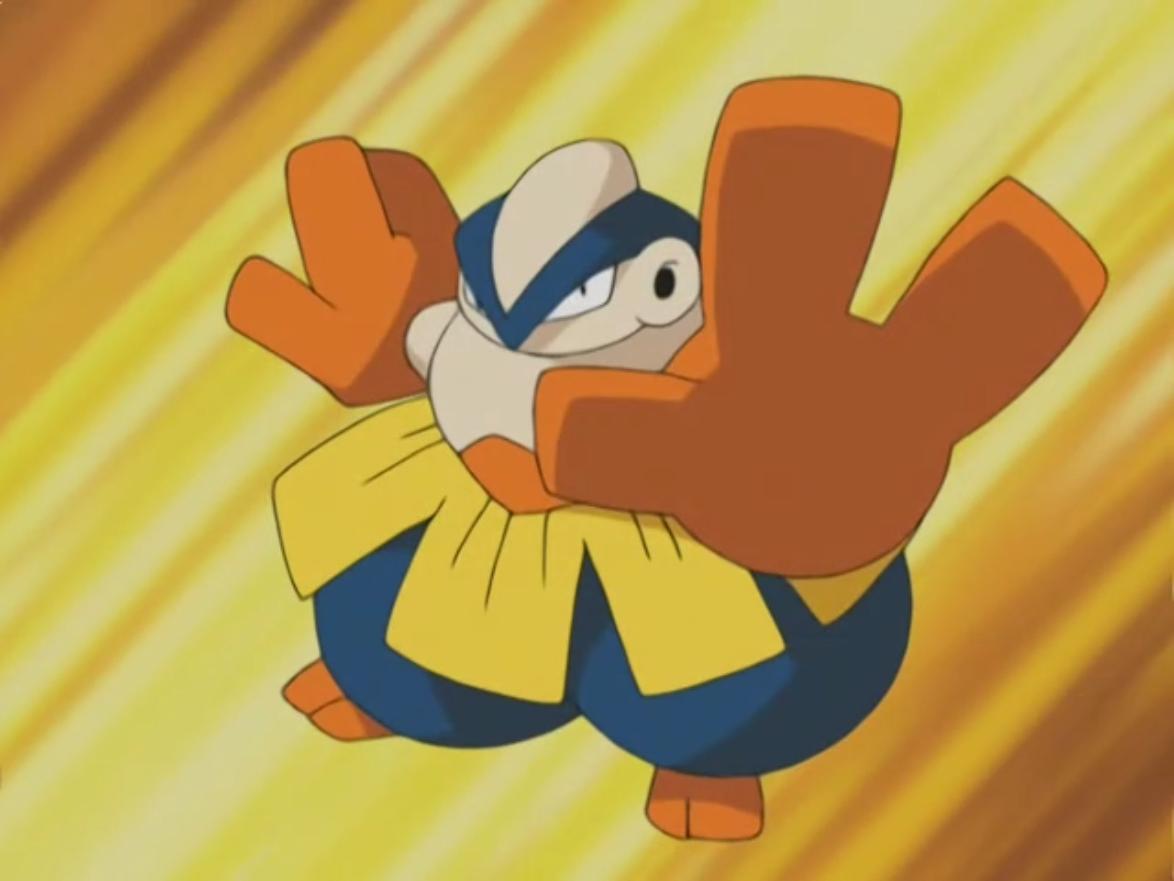 Retrieved from "https://pokemon.fandom.com/wiki/Brawly_(anime)?oldid=1258118"
Community content is available under CC-BY-SA unless otherwise noted.