For the variant appearing in the games, see Brawly.

Stick This in Your Craw, Crawdaunt II

Brawly is a character appearing in Pokémon Adventures, who is the Gym Leader of Dewford Town in the Hoenn region.

This section, or a part of it, has been transcluded from Brawly; any changes involving it should be made there instead. /

Brawly is a powerfully built young man, who has blue spiky hair and blue eyes.

Brawly wears orange goggles on his head, which ties part of his hair back. He has on a black and orange surfing outfit, with gloves of the same color. He also wears blue shorts with black and orange shoes, in shapes of feet.

Brawly loves to surf with his Pokémon, Makuhita. This is due to his training of the martial art, jū, that allows him and his Pokémon to redirect certain attacks. Brawly has a very casual and laid-back personality, for he joined the group that supported Team Aqua, as it would give him more sea to surf on. Brawly is also quite determined in certain tasks, and has a strong mind that made him resist Blaise's fiery illusions. Brawly is also Bruno's friend, with whom he also trained the martial art, gō.

The name Brawly comes from "brawl".

A long time ago, Brawly trained the martial arts with his friend, Bruno. Brawly decided to learn more about jū, while Bruno trained gō.[1]

Sapphire thought of the Gym Leaders, including Brawly, whom she had to battle against for the bet she had with Ruby.[2][3]

Brawly appeared before Sapphire outside of Dewford Town, surfing alongside his Pokémon, Makuhita. As a huge tidal wave rippled above him due to a Wailord, Brawly evaded it with relative ease. He heard Sapphire pleas from afar, as he dismounted from his surfboard. May rushes over to Brawly, as he introduced himself to her. Brawly notices that Sapphire was carrying the Stone Badge on her satchel bag, to which he states that he was the Gym Leader of Dewford Town. She was instantly excited, as Brawly explained that he was going on a training expedition for days, so he asked of her to challenge him the next day.[4]

When Sapphire returned after rigorous training in the Granite Cave, Brawly approached her. He outlined the rules for their battle, quickly sending his Machop from its Poké Ball. However, before Machop could intercept Sapphire's Pokémon, it suddenly phased away, leaving Brawly surprised. He wondered what her Pokémon was, as his Machop gets knocked down by a flurry of hits. Sapphire's Combusken revealed itself, as Brawly commended her training. Brawly then sent his Makuhita, as Sapphire revealed her Lairon. Brawly commented that he would no longer hold back against her, as the two Pokémon charged at one another. However, Makuhita dodged Lairon's Metal Claw attack with relative ease, as Brawly stateed that his strategy was to utilise the enemy Pokémon's flaws. Brawly moved his Makuhita beside Lairon flawlessly, attacking with its fists. However, Brawly commended her superfluous training when Lairon refused to go down, but stated that she still had yet to learn the secret behind his techniques. When Sapphire resorted to her Combusken's Flamethrower, as Brawly wondered whether her change in tactic would help at all. Makuhita absorbs the attack with its Thick Fat ability, as Brawly proclaimed victory over Sapphire. When Sapphire understands the secret of Jū, Brawly confirmed that the accumulated energy acquired can be released in the form of evolution. Thus, his Makuhita evolved into a Hariyama.[5]

Hariyama charged at Sapphire's Combusken, who was still trapped in the rock face. Brawly reiterated that he had won, as Hariyama and Combusken clashed with one another. However, when Sapphire stated that she had won, Hariyama toppled to the ground, much to Brawly's surprise. He asked her how she managed to bring down Hariyama, to which Sapphire revealed that Combusken had used Double Kick, leaving it open to another attack. Brawly commented that she was a prodigious child, and granted her the Knuckle Badge. Just then, Sapphire heard something coming from the Granite Cave. Brawly stopped her, for even if she did train in the cave, there were dangerous Pokémon living inside. However, Sapphire told Brawly knows a certain "fool" was trapped inside the cave, so Brawly mistook the fool was her friend. Regardless, Brawly understood the importance and let Sapphire go on and bid her farewell, as he had to go on the expedition.[1] Winona also warned Flannery about Sapphire, who defeated Roxanne, Brawly and Wattson.[6]

Later, Brawly answered a summon from Flannery to head to Fortree City immediately. He then arrived alongside Roxanne and Wattson to attend the Gym Leader Conference. When Flannery announced that Team Aqua was directly responsible for the attack upon Mt. Chimney, Brawly announced that he was instantly on their side, alongside Roxanne and Wallace. This caused dissension to occur between the Gym Leaders, which was broken up by Norman, who stated that he would support neither of them, much to Brawly and the others' surprise.[7] Later, when Winona brought Sapphire to Tree Tower, Brawly and the other Gym Leaders approved of her decision to rally the Trainer's support.[8][9] Still, Roxanne and Brawly told Winona she made the decision of involving Sapphire in the fight without them.[10] She and Brawly watched how Sapphire won the battle against Winona, who gave Sapphire the Feather Badge.[11] The Gym Leaders also watched as Kyogre resurfaced and started a tsunami, which flooded the cities.[12] The Pokémon Association director sent Roxanne and Brawly to deal with the areas affected by drought from Groudon.[13]

Brawly went with Roxanne to the place, where Groudon emerged from the ground. Winona contacted them, but the link was soon severed.[14] Groudon used Rock Slide to block their path. Brawly had his Machoke use Focus Punch, but Groudon immediately hit it away. Roxanne feared they weren't powerful enough to stop Groudon.[15] Winona also told Sapphire she hated how the Gym Leaders were putting their lives at stake, while she and Sapphire were unable to do anything.[16] Roxanne managed to have her Nosepass use Block on Groudon, preventing it from moving any further. Groudon used Thunder on Machoke, paralyzing it, but Brawly's Hariyama cured its paralysis with Smelling Salts. Soon, Wallace arrived to battle Groudon as well. However, they soon faced the Team Magma admins.[17]

Brawly was then taken by Blaise and his Swellow to the Lilycove Museum.[18] Blaise attacked Brawly and his Machoke with his Slugma's Flamethrower, obscuring his vision. Brawly then reacted when his Machoke fell to the fierce flames, retaliating by using a combination of Leer and Revenge on Slugma. However, it turned out to be an illusion created by the intense heat waves, as Brawly and his Machoke encounterd a swarming myriad of arms, converging on them from the walls. Brawly tried to console his Machoke, explaining that they were just illusions, as Blaise appeared, telling him to cede defeat. He explained to Brawly that his goal was to simply prevent the Gym Leaders from stopping Groudon]'s advance, as Brawly stated that he learnt a new technique from an old friend. Brawly summoned his Hariyama, who used Fake Out and Knock Off in conjunction.[19] This defeated the two Slugma easily. Roxanne sensed the explosion from the blast, wondering whether Brawly was alright.[20] Brawly's Hariyama used Knock Off, which hit Slugma. Brawly noticed the Slugma had Tate and Liza's hairpins. He demanded to know where the twins were, but Blaise refused to answer, seeing Brawly was overwhelmed by the illusions. Brawly realized Team Magma's plan was to stall everyone and let Groudon continue onwards. Blaise simply commended Brawly to have defeated his illusions and walked away, leaving Brawly on the ground.[21] The word of Brawly's defeat reached the Pokémon Association's director.[22]

After the conflict ended, Brawly recuperated from his severe injuries aboard the Pokémon Association airship. There, he congratulated Ruby and Sapphire for stopping the crisis. After the crisis was over, he and Roxanne were working together.[26]

Brawly decided to help in the meteorite crisis and went with the Gym Leaders to Sootopolis City.[27] There, per Steven's orders, Brawly launched an attack, which merged with others' attacks and shattered the meteorite.[28] 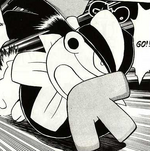 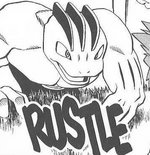 Brawly surfing with his Makuhita. 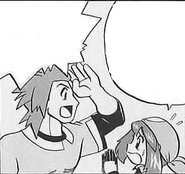 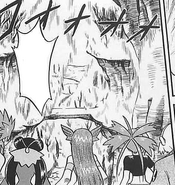 Brawly and Roxanne recuperating aboard the airship.