Prior to Short Shift for Shiftry

This Machoke is a fighting-type Pokémon owned by Brawly.

Brawly sent Machop in the Gym Battle against Sapphire. Since it could not see the Pokémon Sapphire sent, Machop nearly dodged Combusken's Peck attack. Since Sapphire swapped her Combusken with Lairon, Brawly swapped his Machop with Makuhita to continue the battle.[1]

Eventually, Machop evolved into a Machoke and went with Brawly to the Gym Leaders' gathering in Fortree City.[2]

Due to Groudon's threat, Brawly and Machoke went to battle it with Roxanne and her Graveler.[3][4] Since Groudon tried to block their path with Rock Slide, Machoke used Focus Punch, but was blown away by Groudon.[5] Groudon used Thunder, which paralyzed Machoke. Fortunately, Brawly's Hariyama used Smelling Salts, which cured Machoke from its paralysis.[6] Brawly was carried away by Blaise and faced him in the Lilycove City's museum. Machoke used Leer, followed with Revenge, on Slugma. However, Slugma's fires made the pictures come to life and try to grapple Machoke and Brawly, even if the latter knew these were just illusions.[7] 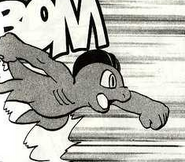 As Machop
Add a photo to this gallery

Retrieved from "https://pokemon.fandom.com/wiki/Brawly%27s_Machoke?oldid=1160605"
Community content is available under CC-BY-SA unless otherwise noted.