Brawly's artwork in Omega Ruby and Alpha Sapphire, and in Ruby, Sapphire and Emerald.

Brawly is a Fighting-type Gym Leader in Hoenn. His gym is in Dewford Town. He will award the trainers the Knuckle Badge if they defeat him.

Brawly is a powerfully built young man, who has blue spiky hair and blue eyes.

His outfit in Emerald is the same as it is in Ruby and Sapphire.

Brawly wears orange goggles on his head, which ties part of his hair back. He has on a black and orange surfing outfit, with gloves of the same color. He also wears blue shorts with black and orange shoes, in shapes of feet.

Brawly is a young man who loves surfing. As seen by his clothing and equipment in the gym, he often spends his time training and surfing. He peppers his speech with surfing lingo, further emphasizing his hobbies.

The name Brawly comes from "brawl".

His role in Emerald is the same as it is in Ruby and Sapphire. 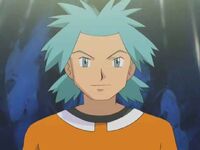 Retrieved from "https://pokemon.fandom.com/wiki/Brawly?oldid=1421945"
Community content is available under CC-BY-SA unless otherwise noted.