Braixen (テールナー, Teerunaa) is a Fire-type Pokémon introduced in Generation VI. It is the evolved form of the Fire-type First partner of Kalos, Fennekin.

Braixen is a bipedal fox-like Pokémon; unlike its pre-evolution Fennekin, it now stands upright on two legs. Braixen is covered mainly in bright yellow fur (with a black underside) that resembles a skirt; it has a collar of fluffy white fur below its thin neck and covering on its chest. It has a long pointed snout with a round orange nose, and bright orange eyes, as well as having tufts of bright orange fur sprouting from its ears. It has a branch embedded in its bushy yellow orange-tipped tail, which it uses as a wand to emit blasts of flame.

Once a Fennekin evolves into Braixen, it no longer eats branches for snacks, but will still keep a tree branch in its tail in order to fight with. Braixen will occasionally wield the branch in battle and use friction to light it on fire, as if it is a wand.

These twigs appear to function as security blankets of sorts for Braixen, helping temper the mood swings they experienced as Fennekin. If a Braixen loses its stick, it will become fretful, anxious, and even angry, going as far as refusing to accept a replacement. Braixen will also use their twigs to communicate with others, which is useful considering these Pokémon are nocturnal. Sticking the twigs back in their flame-resistant tails will put out the flame through oxygen deprivation.

When a Braixen pulls its branch from its tail, the friction causes the tip of the branch to catch fire, and it can swirl the fire as well as shooting it to attack. The flame on the branch can be used as a signal to alert its kind.

Braixen evolves from Fennekin at level 16. It evolves into Delphox at level 36.

Braixen first appeared in Day Three Blockbusters! under the ownership of Aria after her Fennekin evolved off-screen. She later evolved into Delphox off-screen before the events of Battling with Elegance and a Big Smile!.

Serena also owns a Braixen after her Fennekin evolved in Battling with Elegance and a Big Smile!.

Braixen is based on a fennec fox and a kitsune, a fox from Japanese mythology that is associated with fire. Kitsune are also known to take the form of beautiful women, which could be the inspiration for Braixen's more anthropomorphic design. Its fur design also resembles seifuku, a type of uniform worn by Japanese schoolgirls.

Braixen comes from braise (French for "hot charcoal") and vixen (a female fox). It may also come from brazen (bold and defiant).

Its Japanese name, Tērunā, may be a portmanteau of tail (referring to how it keeps its stick in its tail) and renard (French for "fox"). 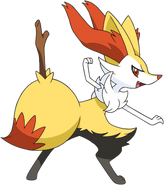 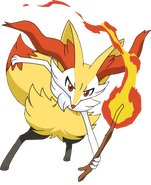 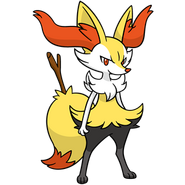 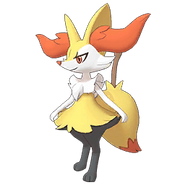 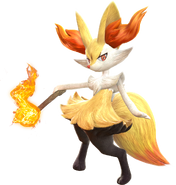 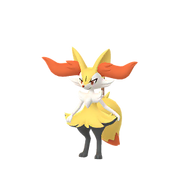 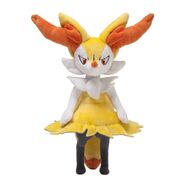