Bounsweet is a small, round Pokémon that can only be female. It has yellow eyes, a magenta-colored body, and a skirt-like design that is colored white. It also has three large green leaves on its head and no arms.

Bounsweet produce a sweet aroma that makes them the prey of many bird Pokémon, though they are usually too unintelligent to care. When under attack, they often exude more of the aroma through the form of sweat, which draws more enemies to them, or rotate the calyx on their heads, which makes them dizzy. They have also been known to flee, but the way they skip and amble about doesn't adequately show their fear, ensuring that nothing ever comes to their aid.

Bounsweet have the ability to exude a fragrance that has a calming effect on people. They also have the ability to drive off some predators by rotating the calyx on their heads, though it's usually a fruitless attempt. They can also use their calyx similarly to a propeller, being able to fly slightly above the ground.

Their sweat can be edible and can be used as a refreshing fruit juice for humans if being slightly diluted with water.

It evolves into Steenee starting at level 18, which evolves into Tsareena by leveling up while knowing the move Stomp.

Mallow owns a Bounsweet where it later evolves in Steenee and then later, a Tsareena.

Bounsweet is a combination of bound, bounce, and sweet. 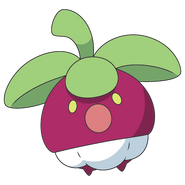 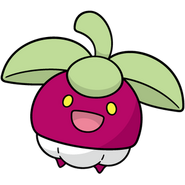 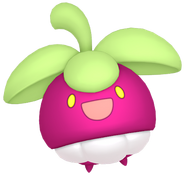