Pokémon Wiki
Register
Don't have an account?
Sign In
Advertisement
in: Female characters, Pokémon the Series characters, Articles with incomplete sections,
and 4 more

For the variant appearing in the games, see Bonnie.

Pokémon Journeys: The Series,
Pokémon the Series: XY and XYZ

Bonnie is a character appearing in Pokémon the Series, the little sister of Clemont and is one of Ash's traveling companions in Kalos.

She is a small and slender young girl with shiny golden-blonde hair tied in a side ponytail with an orange band, and sky blue eyes. She wears a brown short-sleeved top with a soft black ribbon tied into a bow on the neckline, knee-length black compression shorts covered by a puffy white mini skirt resembling a cloud, pink colored Mary Jane shoes and a yellow shoulder bag. After meeting Squishy, a Zygarde Core, Bonnie's bag has been sewn with an extra slot to hold Squishy in it.

Bonnie has a great love for Pokémon. Despite her not being old enough to train Pokémon, Bonnie has strong ambitions and goals of being a Trainer. Sometimes, Bonnie would forget things, shown when she forget that she's not old enough to be a Trainer or that she is the younger sibling.

Bonnie enjoys caring for Pokémon and is very protective of those under her care. She is curious and enthusiastic when encountering new Pokémon as well.

The name Bonnie comes from "Bonnie Brae", a type of lemon. This relates to her brother, who's English and Japanese names both originate from "lemon".

Her Japanese name, Yuriika, comes from the "Eureka lemon", another type of lemon. It could also come from "Eureka", an interjection often said when discovering something, which could relate to her brother's use of machines and being an Electric-type Gym Leader.

Bonnie is good at taking care of Pokémon, despite not being old enough to have one yet. She can also sing, as shown when she made a song for her friend Squishy, Zygarde, and has some fishing skills, shown at the Pokémon summer camp, where her brother and friends went to.

Similar to Dawn, Bonnie has the ability to sense Pokémon feelings. Bonnie's ability grew stronger through her bond with Squishy as she sensed where it was going, the danger it was going to be in, its feelings and its pain. Bonnie also detected Squishy's presence when it was nearby.

Bonnie does care a lot for her dad as she loves him very much and is always happy to see him. Meyer was very happy that Bonnie was going with her brother Clemont and her friends on a journey because he knew it would help her become an amazing Trainer someday.

Being sister and brother, Bonnie and Clemont both care for each other a lot but they have their fights from time to time. Sometimes, Bonnie tends to forget that she is the younger sibling and becomes very protective of Clemont. As a result, Bonnie would often look for a beautiful girl to be her brother's wife, much to his chagrin. Bonnie does get very annoyed with Clemont over-protectiveness and nagging. Despite this, Bonnie understands that her brother loves her very much and she returns these affections. When frightened or stressed, Bonnie will reach for her brother's hand or hides behind him showing the trust they have for one another.

Bonnie and Ash are very good friends as they like to do a lot of fun activities that involve playing with Pokémon due to both of them sharing a common love for them. However, Bonnie sees that Ash can be very dense due to not seeing that their friend, Serena, has a crush on him. Also, Bonnie does get annoyed with Ash's habits sometimes. Despite this, Bonnie supports Ash in his battles, including the battles he has with her brother, or when he helps out Pokémon. They parted ways when their journey together concluded but they knew that their friendship will be eternal.

Bonnie has a sisterly relationship with Serena as they are the only girls in the group and thus share similar interests. Also, Serena is one of Bonnie's best friends. Bonnie would even help Serena for a lot of things, shown when she helped her made Poké Puffs for a Pokévision video for an activity for the Pokémon summer camp they were attending. Sometimes, Bonnie would ask Serena for fashion-related favors. Whenever Clemont wasn't around or needed, Bonnie would go to Serena for comfort or hide behind her. Bonnie and Serena parted ways when she decided to stay in Kalos while the latter continue her own journey to make her dream a reality but despite this Bonnie will always consider Serena the big sister she never had and best friend.

Bonnie and Dedenne are very close with each other. Although he is not hers yet, Bonnie would often use Dedenne to defend herself or others. Bonnie is very protective of Dedenne and cares very deeply about him. Also, Bonnie likes when Dedenne sleeps in her bag and enjoys watching him sleep. When they were going their separate ways from Ash and Serena, Bonnie formally asks Dedenne, who didn't want to say goodbye to their friends, to be her partner when she becomes a Trainer which he accepted as he wants to be hers as well.

Instantly, Bonnie deemed Squishy, Zygarde, to be cute and wanted to care of it right away. When Squishy was in trouble during the time when they first meet by Team Flare, Bonnie sensed that her friend needed her help and saved it from falling when it was out of danger. Over time, Bonnie became best friends with Squishy and she became its. Like she would for Dedenne, Bonnie would do anything to protect Squishy and promised that she will not let anything happen to it no matter what. In addition, Bonnie enjoys having Squishy in her bag and likes watching it sleep.

Bonnie even made a song for Squishy as she would sing that song to help it sleep or whenever it was feeling down and the song even helped it break free from Team Flare's control. Also, Bonnie's bond with Squishy goes deep to the point of sensing what it was feeling or where it was going and its pain. When they went their separates ways, Bonnie promised Squishy that when she became a Trainer they would travel together again.

Bonnie is Clemont's little sister. She travels with him and supports him and Ash in his battles.

During the Team Flare incident, Bonnie went with her brother and Serena to Prism Tower to find Squishy when she sensed it going there. While running to Prism Tower, Bonnie sensed Squishy again when it fell from Prism Tower and even felt its pain. Bonnie then saw Squishy transform and now knows it's true identity is Zygarde. Later, Bonnie secretly wonder off on her own to watch the battle between Squishy and Z2. After Squishy was subdued, Bonnie sensed the pain from Squishy when it got put under Team Flare's control. To get her friend back, Bonnie sung the song she made to Squishy. Miraculously the song worked, Bonnie became happy that Squishy was freed from Team Flare's control and hugged it.

She and Clemont stayed in Kalos while Ash and Serena departed.

Bonnie guided Goh catch a Froakie, which he failed on catching on his first attempt, but with her help, he succeeded. The duo later went to the Lumiose City Gym, where she met Ash and gave him a biscuit to eat. Later, she played with his Dracovish and observed Ash training his Sirfetch'd using one of Clemont's machines, but exploded, due to Sirfetch'd's power starting to overheat the machine. Bonnie cheered Clemont in his battle against Ash.[1]

Bonnie, Clemont and Goh cheered Ash during his battle against Drasna, with the latter winning the battle. After the battle, she asked Drasna to be her brother's wife with the latter blushing, causing Clemont to pull her away with his Aipom.[2]

Being pulled away by Clemont

Serena and Bonnie dressed in a Christmas CM special

Bonnie with Clemont, her father, Meyer and Meyer's Ampharos

Bonnie, along with Serena and Clemont, being hypnotized by an evil, rogue Malamar

Bonnie along with Clemont and Serena, is freed from Malamar's control

Bonnie in her Slowbro swimwear with Dedenne

Followed by the next outfits 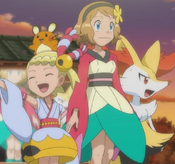 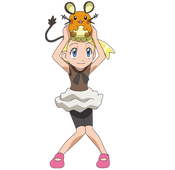 Bonnie with Dedenne and Squishy