Boldore is a large, bulky boulder-like Pokémon that resembles a geode and a golem. Its craggy body is mostly dark blue in color. It has red crystals on its back and front, and a spine that extends between two yellow holes it uses as eyes. It and it's evolutions/pre-evolutions share a resemblance to the Nosepass family and the Geodude family. Despite contrary belief, it does not float.

Boldore is always searching for sources of water deep underground. However, because of its dislike of water, Boldore always takes small sips to avoid getting soaked. It moves swiftly from both sides while facing in the same direction. The orange crystals that stick outwards signifies that a Boldore is in perfect health. In addition, the crystals themselves contain so much energy that a single fragment has enough fuel to power up a hundred dump trucks.

Boldore is able to release powerful bursts of energy from the crystals on its back whenever the crystals themselves start to glow. It uses sound waves to detect its surroundings.

Boldore is the evolved form of Roggenrola as of level 25. It then evolves into Gigalith via trade.

Boldore is based on a golem mixed with a boulder and a geode.

Boldore's English name is a combination of the words "boulder" and "ore". 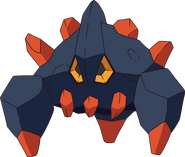 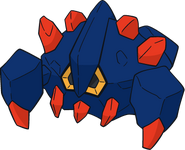 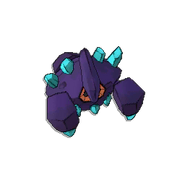 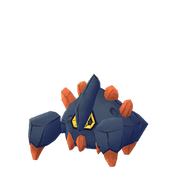