"Yo! Finally got here, huh? I wasn't in the mood at Cinnabar, but now I'm ready to battle you. ... You're telling me you conquered all the Gyms in Johto? Heh! Johto's Gyms must be pretty pathetic then. Hey, don't worry about it. I'll know if you are good or not by battling you right now. Ready, Johto Champ?"
— Blue in Gold, Silver and Crystal.

Blue Oak (オーキド・グリーン  Green Ookido), known as Blue, is the player's rival in the Generation I games and their first set of remakes, and is a Pokémon Champion. During the Generation II games, Blue serves as the Gym Leader of Viridian City's Gym in the absence of Giovanni.

Blue is unique as a Gym Leader, because he has no set type for his Gym, and instead uses a variety of Pokémon. He gives the Earth Badge to trainers who are able to defeat him.

Blue is a tall, thin young man with light skin, brown eyes, and tall, red spiky hair. In Red, Blue, and Yellow (Generation I), he wears a long purple shirt, dark gray pants, a yin and yang necklace, and brown boots with black straps encircling them.

In FireRed and LeafGreen (Generation III), his appearance changes slightly; the colours of his shirt and pants are switched, so he wears a short-sleeved dark gray polo shirt with the collar flipped up and purple cargo pants and black shoes. He also carries a light blue pack around his waist, and has purple bands around his wrists.

In HeartGold and SoulSilver (Generation IV), Blue appears older than he was in previous Generations. He is slightly taller and more mature-looking. He wears a black leather jacket, a black belt around his waist, khaki cargo pants, and black shoes.

In Sun and Moon, Blue wears a new outfit, which consists of a black short-sleeved shirt with buttons, green pants and shoes. He also wears a pair of sunglasses and carries a gray backpack.

It is noted that Gary Oak (from the anime) strongly resembles Blue due to being directly based on him.

In the Generation I games, Blue is a self-absorbed, rude, snarky and overly competitive rival to the player. He will often insult the player, and is not a good sport when the player defeats him in a battle. With each defeat, he insists that the player was lesser and weaker than he was, denies the fact that he is not as skilled, and bids farewell in a disrespectful manner, often saying "Smell ya later!" as he walks away.

However, in HeartGold and SoulSilver (Generation IV), Blue is a more mature and much kinder person, and is shown to gracefully accept defeat when the player challenges and beats him at the Viridian Gym. He is also shown to be passionate and respectful in Generation V, and likes to battle a challenger, no matter who they are.

As previously noted, Blue serves as the player's Rival in the Generation I and Generation III remake games. In Gold, Silver, Crystal, HeartGold and SoulSilver (Generations II and IV), Blue has a less involved role, as the Viridian City Gym Leader.

In Red, Blue and Green, the player first meets him in Professor Oak's Lab, where he gives both a starter Pokémon.

Despite the player first meeting Blue at the games start, the characters have evidently known each other for a long time, as stated by Professor Oak. As with every game, whichever Pokémon the player chooses, the rival (Blue) will choose the type that is effective against it (Except in Generation VII)(e.g. player chooses Bulbasaur (Grass), rival will then choose Charmander (Fire).

Later, after receiving the Pokédex, Blue will set out to find every Pokémon and be one step ahead of the player. As the player progresses through the game, he/she will encounter their rival in several locations and have to battle them every time.

Toward the end, after receiving all eight Gym Badges and defeating all of the Elite Four, it is revealed that Blue has already defeated the Elite Four and has become the Pokémon Champion. Challenging him, the player will battle Blue for the title, and when defeated, Professor Oak will come in and induct the player into the Hall of Fame.

Blue's appearance in the original games changes twice from the original appearance, throughout the game. The second appearance is similar to the first, with the addition of a backpack and a Poké Ball. The third (champion appearance), looks almost completely different, with an all new attire, and different hair.

In these games, Blue's appearance also alters twice after a while, though not as dramatic as the champion appearance in the Red and Blue games. The battle sprite simply are in new poses each time. He is still the Champion until you defeat him.

In Gold and Silver, he is far less involved when compare to the previous. After the disappearance of Giovanni, the former Head of Team Rocket and Viridian Gym Leader, Blue takes over the Gym. Unfortunately for trainers, he is never usually at the Gym, making it hard to battle there. Unlike any other known Gym Leaders, Blue uses a variety of types in his Pokémon team.

In FireRed and LeafGreen, he has exactly the same as in Red and Blue. The only slight difference however is that his appearance does not change throughout the games.

In HeartGold and SoulSilver, he is far less involved compared to FireRed and LeafGreen. Much similar to its namesakes Gold and Silver, Blue becomes the leader of the Viridian Gym. He still uses a variety of Pokémon. In these games, he is supposedly the strongest in Kanto.

In Black 2 and White 2, his role is very minor. He appears in the Pokémon World Tournament as Kanto's Champion and where he is matched up against the player to battle in the Champions Tournament.

Although not making an appearance, he is mentioned by a lady in Lumiose City's Pokémon Center that he had studied in Kalos before.

When the player arrives at the Battle Tree for the first time, they can choose either Blue or Red to be their opponent for a match. He will be impressed by their abilities after he loses the match. They can later challenge him at the Battle Tree.

Blue appears various times in the game, but your first encounter with him is after defeating Brock. You encounter him in Silph Co in which you battle him. He is in professor oak's lab to give you the ability to mega evolve. He can be battled on Viridian City Gym after defeating the champion the first time, once per day.

Blue's artwork for HeartGold and SoulSilver

Blue in Sun and Moon. 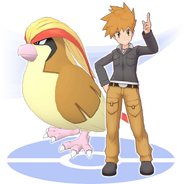 Add a photo to this gallery
Retrieved from "https://pokemon.fandom.com/wiki/Blue_(game)?oldid=1374272"
Community content is available under CC-BY-SA unless otherwise noted.