A Tale of Ninetales

A Tale of Ninetales

Less than 1 chapter as a Machoke

Blue's Machamp is a fighting-type Pokémon owned by Blue.

When Blue bumped into Red near Celadon City, he accidentally switched his Pokémon with Red. Red got Machoke, as well as other Pokémon, as a result. Later, when Blue met Red once more, a Ninetales attacked, so Red sent Machoke, who took the hit. This caused Machoke to evolve into Machamp. After Blue caught Ninetales, he switched his Pokémon with Red back.

At the Indigo League, Blue was grateful for Red for having his Machoke evolved, as he used it against Red's Snor. Snor took some hits, though Machamp used Karate Chop to push it up in the sky. Snor used Double Edge, defeating Machamp in the League. 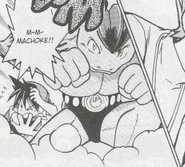 As Machoke
Add a photo to this gallery
Retrieved from "https://pokemon.fandom.com/wiki/Blue%27s_Machamp?oldid=1166570"
Community content is available under CC-BY-SA unless otherwise noted.