Blipbug is a small Pokémon resembling a caterpillar. The top half of its large head is dark blue, while the bottom half is peach. It has large white and gray eyes that resemble glasses. Three sets of two hairs stick out of its head at the top and sides of the top. Its neck is surrounded by a large blue "collar", and four yellow hairs similar to the ones on Blipbug's head stick out sideways from the front. Its body is long, divided into a white, yellow, and larger blue segment. Its four stubby, peach-colored legs are located on its underside of the upper half of the body. A blue hair like the ones on its head appears

Blipbug uses the hairs on its body to gather information about its surroundings, presumably to avoid predators that could easily overpower it.

Blipbug is likely based on a caterpillar or ladybug larva. It may also take inspiration from a stereotypical nerd (its eyes resembles glasses, its neck-feelers resemble a bow-tie, and its antennae resemble bushy or messy hair). It's likely a visual pun on "bookworm."

Blipbug is a combination of blip (the sound of a radar) and bug.

Its Japanese name, Satchimushi, comes from satchi (sense) and mushi (bug). It may also come from search. 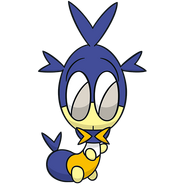