Blaine is a character from Pokémon Red and Green Version. Also known by his title The Hotheaded Quiz Master, Blaine serves as the seventh Gym Leader at Cinnabar Island's Gym. He specializes in using Fire-type Pokémon and gives the Volcano Badge to the trainers able to defeat him.

Blaine is an old man of medium height. He has a bald head, glasses and a white moustache, slightly similar to whiskers. He wears a white lab coat over a blue collared shirt, with a red tie that resembles a flame. He also wears a black belt with a silver buckle, dark green trousers, and gray/brown shoes.

Passionate for his age, Blaine has high hopes in his abilities and not the type to be discouraged easily. Proving his skill is what Blaine desires most, even with the dramatic change of his gym that came to pass. Blaine's tenacity lights a fire in his heart, always he bares a smile on his face to highlight his spirit.

The name Blaine may originate from "blaze" and "flame".

His Japanese name, Katsura, is literally 桂 (katsura, referring to the katsura tree). It may also include 火 (ka, fire).

Blaine has preferred fire type Pokémon in his time as a gym leader.

Blaine first appeared in the Generation I games as the Cinnabar Island Gym Leader. Before actually getting inside Blaine's Gym however, the player must find the Secret Key (Sinnoh) to unlock the Gym's door, which is located in the Pokémon Mansion next door. His Gym was filled with quiz machines that unlocked the doors leading up to him. If the player answers incorrectly, they are forced to battle a Gym member.

In the Generation II games, the volcano on Cinnabar Island has erupted forcing Blaine to relocate to the Seafoam Islands.

In the Generation III remakes, Blaine is again the Cinnabar Gym Leader, with an updated appearance. 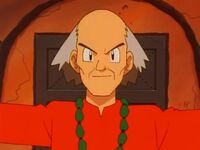 Blaine in Pokémon the Series (anime)

Blaine's VS sprite in Red & Blue

Blaine's VS sprite in Yellow

Blaine's VS sprite in FireRed & LeafGreen 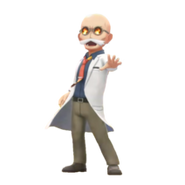