For the variant appearing in the games, see Hilbert.

Black is the main character in the Black & White arc of Pokémon Adventures.

This section, or a part of it, has been transcluded from Hilbert; any changes involving it should be made there instead. /

Black is a tall, thin boy. He has medium length, messy mud brown hair and brown eyes. He wears a black T-shirt underneath a sky blue jacket that has a sea blue neck and cuffs and a white zip with gray, slightly baggy pants tightened by a black belt with a silver metal buckle. He also wears a scarlet red cap that has a black Poké Ball logo, a scarlet red pair of shoes with black panels and white soles, and on his left wrist he wears a blue Xtransceiver. He carries a black and blue messenger bag with a large white Poké Ball in the center.

He is shown without his hat and his hair is shown to be messy without the hat. Later, as promised to White, he wears a white shirt with the BW logo agency displayed.

Black is a Pokémon Trainer aspiring to be a Master Trainer, beat the Elite Four and become Champion. He is also clever, as he uses his Pokémon in different ways to help with tasks. He is described also to be 'hot-blooded' because of his loud nature and tendency to do difficult tasks by himself. Black does not understand the meanings of show business like White, as many different aspects of show business surprise him. Black is also familiar with libraries, going there a lot as a child. Also because of Black having many dreams, he cannot exactly think straight. To prevent this from happening often he has his Munna eat them, which he refers to as 'darkening' his 'blank' (in other words, clouded) mind. This allows him to think much clearer in thought and become much smarter in tasks. When he does this, he apparently see everything in his perception in hexagons.

Because of his humongous dream of becoming the Champion of Unova, he is given the title of Dreamer.

Black is a Pokémon Trainer who dreams of conquering the Pokémon League, he also screams it most of the time. Because of these dreams, he can't keep focus on the real world, so he has his Munna use Dream Eater on him to "blank his black mind" which causes him to sense things others can't just like finding the real culprit that in which Black was also accused of messing with White's Xtransceiver commercial, but found the real culprit: a Galvantula, he uses Tep but got most of their equipment burned but he captured it. He also joined the Pokémon BW Agency under President White because he owes White a lot of money because White payed for the equipment in which his Tep burned makes him no other choice but to join her. In Accumula Town, he get's angry at Team Plasma because some people released their Pokémon because of Team Plasma's speech, even Pokémon some people have kept for at least a very long time. He runs towards into finding Team Plasma.

As the story goes on, he starts to call White "boss" because of he being her employee. Black also encounters N and had a match against him which ended in a draw because both of their Pokémon fainted. Though Black stated that N was probably a good guy even though in Team Plasma because his Munna read N's thoughts and it was safe to say that he was a good person. He later met Bianca and Cheren in Striaton City to team up on a three-on-three battle or a Triple Battle. The battle starts out rough but finally manage to win by knocking out Chili's Pansear. Black's Munna runs away after being attracted to eating a strong dream. Black goes after Musha to find out Team Plasma has captured Musha. He fights Team Plasma off and saves Musha.

Once he arrives in Nacrene City, he gets swayed into helping White shoot a video. But a Scraggy and Scrafty steal a prop for the scene and have to be knocked down. Black then leaves for his Gym battle, running through the puzzle quickly. The Gym battle is ended in a double knockout but Lenora gives her badge up anyway. White then tells him that they should head to Nimbasa to get her Musical project done. But Team Plasma steals the dragon fossil in the museum and Black sets out with Burgh to find it. They then get attacked by the fossil but are able to find the Cofagrigus controlling it and knock it down.

After the fossil is returned, Black and White are attacked by Virizion but don't know what it was. They meet Battle Company President Geoff who suggests it was Virizion. When they arrive in Castelia City, Black finds a lost boy and tells Tep to watch the boy while he gets the authorities. But the boy is a Zorua and attacks Tep. When Black returns, the Zorua escapes and he has no idea what happened. When he meets up with White, Tep goes on the verge of evolving. Black then leaves for his gym battle. In the battle, Tep evolves into Pignite and is renamed Nite. Then they hear about the Pokémon kidnappings. The discover that Team Plasma are the culprits and are defeated. Black and White come to Liberty Garden to find Victini under Team Plasma's custody. Black defeats them and frees Victini.

Black later meets Grimsley who plays a game with him. They then discover a Team Plasma grunt trying to get to the Relic Castle. Black and White come to Nimbasa and start working on the Musical project after they launch the opening ceremony, Black fights his gym battle stuck on a roller coaster but wins using the vertical wheel of the coaster and meets Thundurus. Black returns to find White then sees Marshal carrying her unconscious, thinking he attacked her. Marshal then tells Black to take her to the hospital to recover, and Black does so. After White has regained consciousness, she tells Black the story of her and N in the ferris wheel and Gigi going with him and not her. He then tries to coach White how to catch Pokémon when he captures a Tirtouga. He lends her his Brav for the Battle Subway and they go their separate ways.

A while later, after White comes back, he discovers a battle between Unova Champion Alder and N going on, which Alder is defeated, making Black's dream of winning the Unova League even bigger. He challenges Drayden to a gym battle and enters the league last minute. He makes it all the way to the finals only to find that his opponent is his best friend but brainwashed Cheren. Black manages to defeat Cheren but a battle between N and Zekrom, and Black and Reshiram unfolds. N loses and just as all seems well, Ghetsis pushes Black onto Reshiram as Reshiram is becoming the Light Stone again. During the process, he asks White if he has payed off his debt. White says yes and Black disappears into the Light Stone, which flies away all the way to the Entralink.

Black is first seen in chapter 540 as a silhouette in the Light Stone. 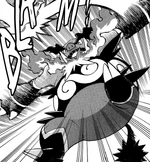 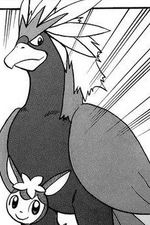 Black and White in the manga.

Black with his hat

Black putting back his hat.

Black stating that N is a good guy.