Blacephalon looks like a very colorful Headless Horseman in a Jester's outfit.

It mostly has a slender body with very vague limbs and a white collar on top, which holds its clear spherical head in place when it is not using it to Attack. Its spine and pelvic area have blue, pink and yellow stripes. Its legs are slender with high heel like feet and a white color scheme. Its left leg has a blue orb for a knee cap, while its right has a pink orb instead. The colors are swapped for its arms, which end in hooks. Its detachable head has rings of blue and pink dots and has an explosion shape design with the same colors and a yellow spot in the center.

Blacephalon tricks targets into letting their guard down as it draws near with its funny gait, swaying this way and that—then shocks them by blowing up its own head without warning. Before they can recover their senses, it steals their vitality, which it's said to use as a source of energy.

Blacephalon does not evolve.

In Pokémon Ultra Sun, after Necrozma absorbs Nebby and becomes Dusk Mane Necrozma, a Blacephalon appears in Mahalo Trail through an Ultra Wormhole opened by the Prism Pokémon and faces Hala, Hau and Tapu Koko in a battle.

Its first and only appearance was in "Twirling with a Bang!", where it entertained the viewers of a fireworks show, and later tried to compete with a Xurkitree to see who could perform the better form of entertainment. Both were distracted by the Ultra Guardians Super Pokémon fireworks and then knocked out by Ash's Lycanroc, who used Splintered Stormshards to take them both out. It has currently been returned to its home world.

It was one of the Pokémon Guzma's ultra wormholes opened in the Pokémon adventures manga. Both Sun and Salon Maiden Anabel tried and failed to catch it, only to be saved by Tapu Bulu, who got rid of the Ultra Beast.

Blacephalon is based on a clown and fireworks. It may also take some inspiration from dandelion seed heads and/or the anime Popee the Performer, which centers around an ill-tempered clown, or the related trope as a whole, due to its actions. It's ability to remove it's head and its Ghost type may reference the Nukekubi, a ghost-like floating head that can drain people of their vitality similarly to a vampire, which Blacephalon's Ultra Moon Pokédex entry references.

Blacephalon is a portmanteau of blast or blaze and the Greek root cephalo-, meaning "head." 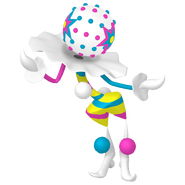