Bisharp (Japanese: キリキザン Kirikizan) is a Dark/Steel-type Pokémon introduced in Generation V. It is the evolved form of Pawniard.

Bisharp is a tall humanoid-looking warrior-like Pokémon. Its body is heavily armored and appears to be made of metal. Like its pre-evolution, Pawniard, Bisharp has a helmet-like red and gray dome on its forehead with a large and very sharp double-edged yellow blade protruding from its forehead and extending down the back of its head. It has small, glaring eyes with black pupils and a yellow face with a visible frowning mouth. Its torso and abdomen are deep gray with three vertical segments and two sharp, crescent-shaped blades encircling its chest and abdominal sections. It has armored red shoulders with thin black arms and glove-like white hands with two fingers and blades on its elbows. Its legs are powerfully-built and red in color, and its feet (which look like armored boots) are white with a vertical segment running through each.

A Bisharp is always the leader of a pack of Pawniard. Yet, there can be only one Bisharp to be the leader, so when a Pawniard evolves, it fights with the original leader. The loser (either the pack leader or the newly-evolved one) gets banished from its pack forever, and usually this kind of event traumatizes it, causing it to go nuts completely especially in severe cases.

Bisharp is the evolved form of Pawniard, as of level 52.

Like its pre-evolution, Bisharp appears to be based on a samurai from Japanese pre-gunpowder warfare. It also has traits of a knight and characters from a Japanese show "Kamen Rider".

Bisharp's English name seems to be derived from the chess piece known as the Bishop and the adjective "Sharp". 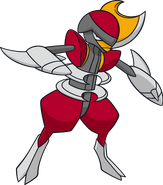 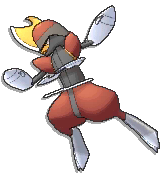 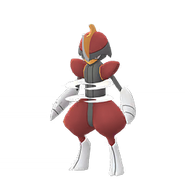