Binacle is a two-headed barnacle-based Pokémon. It lives in pairs two on the same rock. Its two heads also serve as its hands, as it has sharp yellowish claw-like features atop its heads. Its heads are attached to a grey rock by orange and white striped tentacles. Each of Binacle's heads are brown in color with sulky expressions on their faces.

Binacle seems to be an ill-tempered Pokémon, like Dodrio. Its two heads sometimes quarrel, and often a head will move to a different rock when fights break out.

Binacle is based on a sea barnacle and a pair of hands. 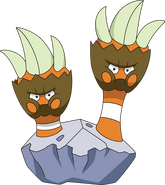 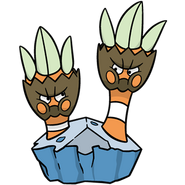 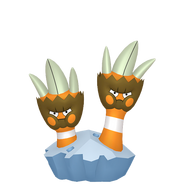 Add a photo to this gallery
← Malamar | Binacle | Barbaracle →
Retrieved from "https://pokemon.fandom.com/wiki/Binacle?oldid=1285273"
Community content is available under CC-BY-SA unless otherwise noted.