Bill is a character first appearing in Red and Blue.

Bill invented the Pokémon Storage System and also helped create all of its successor systems. Bill also invented the Time Capsule found in the Johto region. In the Kanto-based games, Bill lives and works on Cerulean Cape and his family lives in Fuchsia City east of Koga's Gym.

Bill has some fans. One of them, Pokémaniac Brent in Generation II, will sometimes call the player character and tell him or her trivia about Bill. Some of the things he says is that Bill's mother was a Kimono Girl, his sister can't wink, and that Bill is lactose-intolerant.

Bill invites the player character to One Island to meet his friend Celio after you have gotten the Volcano Badge. In the Johto based games, he lives in Goldenrod City with his sister and mother, while his grandfather lives on Cerulean Cape. His Hoenn counterpart is Lanette and his Sinnoh counterpart is Bebe.

In HeartGold and SoulSilver, Bill had the same role as that of Gold, Silver, and Crystal.

It is revealed that Bill created the Pokémon Storage System in Alola. As he had been fused with a Pokémon before, Lillie departs from Alola to Kanto to visit Bill in order to find hopes for Lusamine to be free of Nihilego's poison. 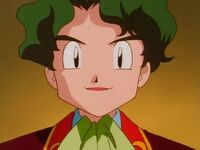 Bill in Pokémon the Series (anime) 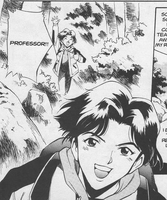 Bill in The Electric Tale of Pikachu (manga)

Artwork of Bill for Gold, Silver and Crystal.

Bill as a Clefairy with the player in FireRed and LeafGreen.