Bianca is one of two friends/rivals the main character has in Pokémon Black and White. All three of them reside in Nuvema Town.

Bianca is the rival who picks the starter Pokémon with the type disadvantage to your chosen Pokémon. Even though her dad rages over the idea of Bianca having a Pokémon journey, she goes on one anyway, thinking that she'll grow stronger as a person and a Trainer. She often helps Professor Juniper with her studies. She reveals that one of the things she would aspire to be would be a model like Elesa.

Bianca is a young lady with short blonde hair, fair skin, and bright green eyes. She is also medium height and is slim, though she has very wide and well-defined hips.

Bianca's usual outfit consists of a white shirt under an orange tank top, a tight fitting shin-length white skirt which gives her bottom half a wider shape, and a green beret with a white stripe running along the rim. To complete her outfit, she wears a white bracelet on her left arm, along with orange tights and yellow flats with white bows. She also carries around a green fringed shoulder bag for storage, which she wears on her right hip and slings over her left shoulder.

Bianca sports red glasses, a low white V-neck top with a black top underneath, knee-length green jogging bottoms, a green shoulder bag, orange boots with black soles and bows, green beret with a white bow and orange puffy coat, due to the recent coldness in Unova.

Bianca is a sweet and cheerful girl who worries about being weak and what to do in her life. She has a strong side by traveling without her father's consent. Later on, she grows in confidence and accepts she'll never be the strongest trainer. She is protective, volunteering as a bodyguard for various characters, including Professor Juniper at Chargestone Cave.

The name Bianca comes from bianca (Italian for "white"). This goes alongside Cheren's name, who comes from "black".

Her Japanese name, Beru, comes from bel (Macedonian for "white").

Bianca appears as Professor Juniper's assistant, giving the character their first Pokémon. She gives a few tips on catching Pokémon. 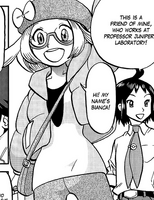 Bianca in the Black 2 and White 2 trailer (anime)