Bewear share a resemblance between a red panda, a bear, and giant panda. It has a pink head with white ears and a curved line. It has a black furred body with pink paws and white claws on its feet. It also has a pink and black ring tail. It has a white muzzle and a black nose.It has a short tail with dark pink rings.

Despite trying to show their friendliness by waving their paws to humans, it is better not to get close to them because they have incredible power that can crush humans' bones, meaning that they are one of Alola's most dangerous Pokémon.Trainers of this Pokémon must teach it how to restrain itself when showing affection. Its hugs are powerful enough to shatter bones. Many Trainers are said to have left the world after receiving Bewear's hugs. Bewear uses its arms to subdue its prey before taking it back to its nest. In Lental, Bewear are known to hibernate during seasons when food is scarce.

Bewear has immense strength, and its spine-crushing hugs have killed many unwary trainers. It has been shown to be capable of tearing full-sized trees in half, able to run fast enough to walk on the surface of the water, and to leap great distances from the tops of tall buildings.

Bewear evolves from Stufful at Level 27.

Bewear (the female ones as revealed in SM096 below) meets Ash and his Pikachu in "Alola to New Adventure!" When Ash waves back, she gets disturbed and starts slashing trees with her paw. Frightened, Ash and Pikachu run away.

She is also part of new running gag for Team Rocket once they arrive in the Alola region in "Loading the Dex". Instead of blasting off into the sky like they often do, they get carried off by Bewear.

In SM096, Bewear is revealed to have a long-lost child Stufful, whom they got separated for long where the latter was found and rescued by Wicke of Aether Foundation, the taken to the shelter in Aether Paradise, until they finally reunite during Team Rocket's second infiltration in that place.

Bewear appears to be based on a red panda, as well as a person in a mascot costume or fursuit (possibly referring to Pokémon's popularity in the furry fandom). Its fondness for honey as seen in the anime may be based on the character Winnie the Pooh (which is reflected in its Shiny coloration). Its act of hugging people (occasionally to death) may be a reference to a bear hug, usually described as a large and strong-gripped hug used in wrestling, which may be why it is a part Fighting-type Pokémon.

Bewear might be a combination of bear, beware, and wear, referring to its mascot suit-like appearance. 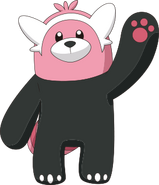 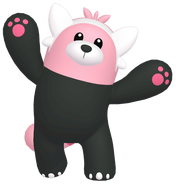 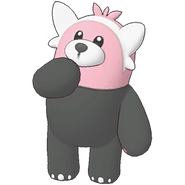 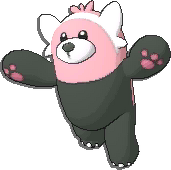 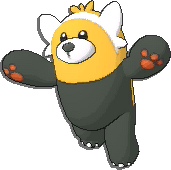