Bertha in other languages

Bertha is an old aging woman, whose appearance and name resembles Agatha: they both have the same hairstyle. Bertha wears a brown scarf, a white buttoned coat, a black skirt, long grey socks and black shoes.

Despite her humble and gentle demeanor, Bertha holds herself as a strong and enduring trainer. She knows when she's beaten and doesn't regret defeat. Bertha is smarter than she appears, warning the player that their next opponent is even stronger than she is.

The name Bertha's comes from "earth."

Her Japanese name, Kikuno, may be derived from 崎嶇 (kiku, steep) or 国 (kuni, country). In either event, it may also come from Kikuko, Agatha's Japanese name, as both are elderly women who are part of their region's Elite Four lineup. 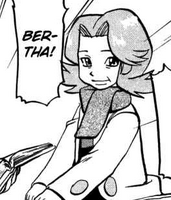 "Well, well. You're quite the adorable Trainer, but you've also got a spine. Ahaha! I'm Bertha. I have a preference for Ground-type Pokémon. Well, would you show this old lady how much you've learned?"

"Dear child, don't assume for an instant that you've won."

"Well! Dear child, I must say, that was most impressive. Your Pokémon believed in you and did their best to earn you the win. Even though I've lost, I find myself with this silly grin!"

"You're quite something, youngster. I like how you and your Pokémon earned the win by working as one. That's what makes you so strong. Ahahaha! I think that you can go as far as you want."

"The Trainer in the next room is a much more formidable opponent. You really must have your wits about you. However, I think you can go as far as you desire. Ahahaha!"