Bellsprout is a plant-like Pokémon. The body is a thin brown root and stem system. Bellsprout has two root-like legs. It has two leaves on each side. Its head is yellow and shaped like a bulb, the tip is colored pink, and it has the smallest amount of dirt on its feet.

All Bellsprout have the ability Chlorophyll, which increases Bellsprout's Speed when it is sunny. It is said to ensnare its prey in its vines and devour it, and can also spit a highly corrosive fluid that can melt even iron. This Pokémon prefers hot and humid environments, since it can absorb more moisture from the ground by planting its root-like feet. In battle, Bellsprout can take advantage of its flexibility to bend and sway its way out of the range of its opponent's attacks, no matter how powerful they may be. It is quick capturing its prey with its vines.

Bellsprout has appeared numerous times in the anime series, most notably in "The Fourth Round Rumble," where Ash battled one during the Indigo League. 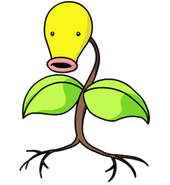 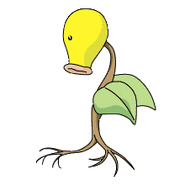 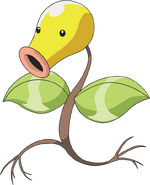 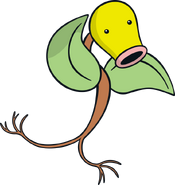 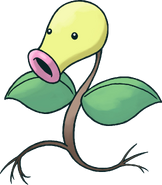