Beldum is a long, robotic Pokémon with three claw-like appendages on its backside. Beldum has but merely one, red eye. It's eye is on a sphere that is attached to the rest of its body.

Beldum uses magnetism to move, communicate, and attack. In the game, Beldum has the ability "Clear Body", which prevents any of its stats from being lowered.

One of Ash's main rivals in the Hoenn region, Morrison, had a Beldum that soon evolved into a Metang. 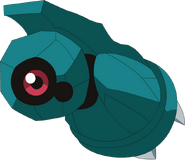