Beheeyem is a tan extraterrestrial Pokémon with an oblong head that features depressions on both sides. It has black, symmetrical lines going down the front of its head. Under the rim of its head, there lay two glowing green eyes with small black pupils. It has a tan "collar" and four dots on its chest of the same color. Beheeyem's arms have three finger-like digits: one red, one green, and one yellow. It has a rim underneath its main body, under which are two small legs.

Beheeyem communicates by flashing its multicolored fingers. It can also change the memories of its opponents, being able to erase or even rewrite them.

In Galar, Some people believed that Beheeyem is to be responsible for the mysterious disappearances of Dubwool whenever it visit farms and it can be seen hovering above wheat fields.

Beheeyem is the evolved form of Elgyem as of level 42.

Beheeyem is based on an extraterrestrial life-form. Its body structure also resembles a giant hat and trench coat, which are stereotypical clothing for spies and government agents. The level its pre-evolved form, Elgyem, evolves at, Level 42, may reference The Hitchhiker's Guide to the Galaxy, as the number 42 is stated to be the meaning of life, the universe, and everything. Its glowing fingers may also reference ET. Its fingers are also similar to the faces of the aliens that appear in The War of the Worlds movie. Its Pokédex entries also suggest references to the Roswell incident and Area 51.

Its Psychic-type could reference how some aliens in various media are able to use telekinesis to battle or abduct people. The communication through lights and sound on the colored fingers that they use in the anime could be a possible reference to Close Encounters of the Third Kind, where people used lights and beeping sounds to communicate with aliens. Its Sword Pokédex entry references how Aliens in media are commonly shown abducting cows or other farm animals (however, Dubwool is a sheep and not a cow), and it's Shield Pokédex of it hovering over wheat fields references how Aliens burns crop circles into farmlands.

The Ultra Sun Pokédex entry may be a reference to Men in Black, with the phrase "Using its fingers that flash three different colors, it controls its opponents and rewrites their memories" being a close description to the neuralyzer within the Men in Black series.

Beheeyem's name is a phonetic spelling of the letters B.E.M, which stands for Bug Eyed Monster, a term some people use for aliens in alien sightings. It may also be derived from "beam".

Megalon, its German name, is a portmanteau of "mega" and "encephalon" (a vertebrate's brain).

Dàyŭguài, its Chinese name, is a portmanteau of (big), (big universe), and (strange, or short for , meaning "monster" or "creature"). 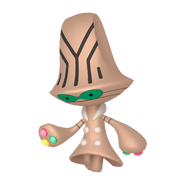 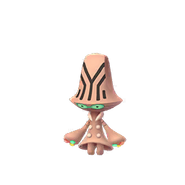