Bede is a character appearing in Pokémon Sword and Shield as one of the rivals. He is one of the people who once received endorsement from Chairman Rose but later had his Gym Challenger status revoked. Opal recruited him to be her successor soon after.

He mostly specializes in Psychic types, but changed to Fairy types after succeeding Opal's position.

Bede has a curly head of platinum blond hair and purple eyes that are heavily lashed. He wears a long magenta and violet coat, a golden wristwatch, a single thumbless glove, a Dynamax Band, white pants that are meshed along the back and pink tabi-style sneakers. His coat has the Macro Cosmos symbol and a pouch stitched on the back.

After becoming Opal's successor, his outfit changes to the pastel Galarian Fairy-type uniform. He wears an overly-baggy shirt that's tied up in the back with a long-sleeved white turtleneck underneath, white and pink shorts with his league number on the left leg, and brightly colored high-top trainers. He keeps the single thumbless glove and Dynamax Band, but ditches the white pants for a pair of mismatched leggings that are striped along the right leg. His eyes are also more brighter.

Bede is extremely prideful about his ability as a skilled Pokémon Trainer and his endorsement from Chairman Rose, always wanting to prove himself to be worthy. However, he is very introverted, usually keeping to himself and has an elitist view of himself prior to being taken in by Opal.

After being subjected to the harsh Fairy-type boot camp by Opal, Bede appears to have mellowed out significantly, no longer refusing to give autographs to his fans and is much more mild-mannered, although he retains some of his former bluntness and elitism. Opal's training has also caused him to saying incredibly absurd stuff about Fairy-types in general and the color pink, which he relabeled as the "color of Bede". He also becomes much more nicer to the player and admits that they're better than him, although somewhat reluctantly and with the insistence that he would be the strongest Trainer were it not for them.

Bede's name derives from Beta vulgaris (beet), which is a species of flowering plant in the subfamily, Betoideae, of the Amaranthaceae family.

As a child, Bede was sent to an orphanage after his parents ran into trouble. This traumatic experience caused him difficulties on socializing with peers and caused him to frequently scuffle with them. At one point, Chairman Rose visited the facility. Noting his talent, Rose took Bede with him. The chairman granted Bede a Hatenna as his first Pokémon. Since then, Bede began training himself for Pokémon battles, and joined the Gym Challenge to prove himself to be worthy for the Chairman's endorsement.

Bede is first seen signing up for the Gym Championships at Motostoke. After finishing up, he rudely bumps into Hop. If the player tries to speak with him, he dismisses them, finding them not worthy of his time.

Upon encountering the player at the Galar Mine, Bede chooses them as a rival. He later has a rematch with them in Galar Mine No. 2. After the player and Hop leave Motostoke, Bede confronts the two and begins calling out Hop on his awful talent, challenging him to a battle. By the time the player arrives at Hammerlocke, Bede also arrives, having revealed to have won the match. Bede's victory over Hop was shown to have an emotional effect on him, causing him to focus more on proving himself as a trainer, not as the Champion's brother.

After defeating the Stow-on-Side Gym Leader, Bede is seen using Chairman Rose's Copperajah to break down a replica mural depicting the hero of Galar. He justifies his motives as he's collecting Wishing Stars for the Chairman. After the player beats Bede, Rose and Oleana show up visibly angered by Bede's negligence over a historic site and revoke his Endorsement, much to his shock. Shortly after Bede is taken away, the mural collapses, revealing four statues; the two kings of Galar and the sword and shield-wielding Pokémon. Sordward and Shielbert would learn of the destruction, but mistakenly accuse the player instead of Bede.

Humiliated, Bede follows Rose to Hammerlocke in the hopes of convincing his former guardian to give him a chance at redemption. Bede confronts the player when Opal spots him. Opal finds Bede to have the "pink" she was looking for, much to his shock but agrees to undergo Opal's training, believing it to be a way further his talents. Much to his dismay, the "training" consisting of Fairy-types and random nonsense, but Bede still completed it and eventually replaced Opal as Ballonlea's Gym Leader.

During the Champion Cup, Bede interrupts the tournament as the newly-appointed Ballonlea Gym Leader during the Finals, challenging the player into a battle, claiming to retire should he lose. Unexpectedly, Bede loses to the player and intended to honor his terms, but the audience was captivated by the battle and convinced him otherwise, forcing him to remain as a Gym Leader.

After the championship, Sordward and Shielbert unleash several Dynamax Pokémon at the Gyms. By the time the player arrives at the Ballonlea Stadium, Bede has already taken care of them, and asks for a rematch. Ultimately, Bede loses and finally comes to terms with the player surpassing him. 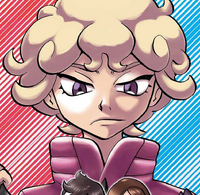