Bea in other languages

Bea is a character that was introduced in Generation VIII. She is a Gym Leader in the Galar region, specializing in Fighting-type Pokémon. She only appears in Pokémon Sword - in Pokémon Shield, the Gym Leader Allister takes her place.

Bea is a slender, fit young girl with tan skin, gray eyes, and gray hair cut into a bob. She wears a skintight black bodysuit (through which the imprint of her navel and abs can be seen) and a uniform that slightly resembles a modified karate gi. It consists of a cut-off white shirt with a black collar and some designs on it, including the Fighting type and Gym Challenge symbols. The shirt also has a black bow that sits just below Bea's bust- when she is defeated in battle, she can be seen adjusting it. To complete her uniform, Bea wears a pair of white shorts with orange and black details and the number "193" on them, along with a black and orange glove on her right hand. For accessories, Bea wears a black and orange hairband in her hair that slightly resembles rabbit ears, a Dynamax Band, and gray kneepads. Finally, Bea is also barefoot, a trait she shares with Maylene, a fellow Fighting-type Gym Leader.

An expert of Galar karate, Bea is a determined fighter who rarely displays her emotions. She has an accurate sense of battle strategies and always remains calm even when facing a crisis. However, in spite of her calmness and tough looking exterior, Bea has a huge sweet tooth. While she tried to keep her love of sweets a secret, her fans eventually found out, which resulted in her having more trouble trying to indulge herself.

Although Bea has a stern exterior, she is actually a sweet person when she smiles, indicating that she can be outwardly nice to trusted ones. A speculation on why she rarely smiles is that her strict parents had posed an emotional burden on her during her childhood. It's also been stated that she lost her smile due to her parents' strict training. Additionally, it is implied that very few people have seen Bea smile, one of which is the player character following their Gym Battle with her.

Bea is first fought in Stow-on-Side's Stadium. She asks about the player character's spirit and talks about testing it out. Bea is a capable fighter, but when the player character nears victory, her stoic demeanor will shatter. Frustrated, she will Gigantamax her Machamp and use the move G-Max Chi Strike, talking about destroying everything in the process. When Bea finally meets her match, she will talk about how she felt the fighting spirit of the player character's Pokémon as they led them in battle.

Later, Bea can be fought in the Champion Cup. Like before, she will Gigantamax her Machamp when the going gets rough. When she is eventually defeated, she talks about how she felt like running away in her bare feet. 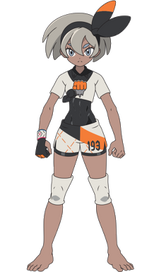 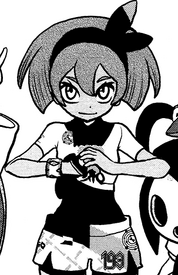 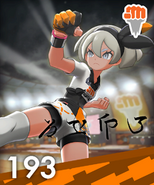 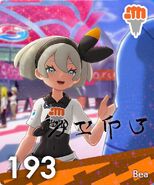