Facility
The Battle Maison is a battle facility similar to the Battle Tower and the Battle Subway from the previous generations. It's located in Kiloude City in Kalos and Battle Resort in Hoenn, to only be accessible after beating the Elite Four. The goal is to beat the highest numbers of trainers in a row in Single, Double, Triple, Rotation, or Multi battles.

Similar to previous battling facilities like Battle Tower and Battle Subway, there are restrictions in Battle Maison battles.

In addition, the following Pokémon are not allowed:

In Omega Ruby and Alpha Sapphire, Wally can be battled in the lobby of Battle Maison.

There are two counters in the lobby, just next to the hall entrance.

The right counter do not sell TMs anymore as they are found elsewhere, while the left counter's goods in X and Y are split between the two counters in Omega Ruby and Alpha Sapphire.

Stat-affecting items and held evolution items are sold by the left counter, while in-battle held items, plus the Luminous Moss and Snowball, are sold by the right counter. 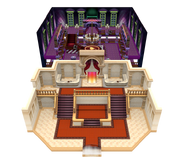 Interior of Battle Maison in the games
Community content is available under CC-BY-SA unless otherwise noted.
Advertisement