The Sinnoh/Johto Battle Frontier is a location featured in Pokémon Platinum and Pokémon HeartGold and SoulSilver. It is similar to the Hoenn Battle Frontier but the Generation IV one has more facilities. 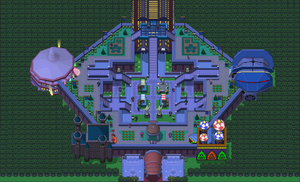 The Battle Toweris one of the Battle Frontier facilities in Sinnoh. It is a standard 3-on-3 battle. The more wins you get, the harder the opponents get.

The Battle Arcadeis a new challenge. It is a standard 3-on-3 battle, but there is a catch. Prior to battling an opponent, the player must spin and stop a gameboard via the touch screen. The space that the player lands on determines the effects of the battle. The effects can affect the player, the opponent, or both; depending on which space they landed. The more wins you get, the harder your opponents get and the faster the board goes.

The Battle Castleis a facility featured in the new Battle Frontier, and is situated in the south-western corner. In the Battle Castle, the player must fight 7 trainers in a row, with the prerequisite being that all hold items must be removed prior to entry. Trainers are also limited to using only 3 Pokémon, all of which have had their levels reduced to level 50.

You choose the type of your opponents. Using Sableye or Spiritomb is effective, because they don't suffer from type weaknesses. Every time you beat a type, their rank goes up. This makes them smarter have a higher level, and higher stats.

Retrieved from "https://pokemon.fandom.com/wiki/Battle_Frontier_(Generation_IV)?oldid=371428"
Community content is available under CC-BY-SA unless otherwise noted.