City
The Battle Frontier is a location featured in Pokémon Platinum Version and Pokémon HeartGold and SoulSilver Version. It is similar to the Hoenn Battle Frontier but this has fewer facilities. 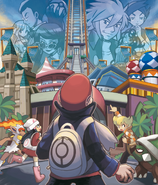