In Generation VIII, Basculin has a third form called White-Stripe Basculin that evolves into Basculegion in the Hisui region.

Basculin is a fish-like Pokémon. In its red form, two parts of its body are separated by a bright red-orange stripe and has spiky white fins. Its blue form has a sleeker design, notably seen on its fins and eyes.

Basculin are aggressive, violent Pokémon. Blue and Red Basculin do not get along and often fight. However, on rare occasions, members of one school might mingle with the other's school. Schools of Basculin are almost always made up of individuals of the same form (with a few, rare exceptions), and will viciously attack schools of the other color with their strong jaws. Consequently, most bodies of water where Basculin dwell will have an overwhelming majority of one form, with most individuals of the opposite color having been killed off. They are also generally hostile to other species, albeit not to the same degree as to rival Basculin (and even-more hostile Carvanha). Still, they usually are aggressive enough to drive off all Pokémon other than Corphish and Crawdaunt. Basculin appear to differentiate threats from allies by color; red Basculin will attack anything blue, while blue ones will attack anything red.

White-Stripped Basculin evolves into Basculegion after using recoil moves that make it lose at least 294 HP, not counting damage that causes it to faint.

Basculin is most likely based on a bass and a piranha. Its bass elements may come from how wild bass are known to be found in New York and its piranha elements may come from how they are known for their aggressiveness. Their aggressive and territorial behavior against their opposing stripe colors and affiliation with Unova (a region based on New York, which is known for its city setting) could draw comparisons to rival street gangs, Its red and blue variations that are hostile to each other is similar to Siamese fighting fish, which come in a variety of colors (including red and blue).

While Basculin's White-Striped Form may likewise be inspired by a bass, its design is also reminiscent of the salmon or the related itou (Sakhalin taimen), due to its behavior and the shape of its mouth resembling the kypes that develop in male salmon.

The selection of colored striped forms being red, white, and blue may reference the national flag of the USA, where Unova, the region Basculin was first introduced, is based.

Basculin comes from "bass" and "masculine". 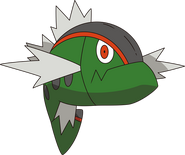 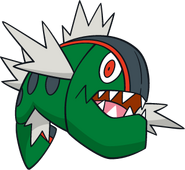 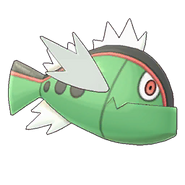 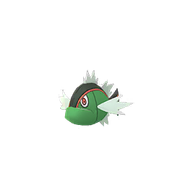 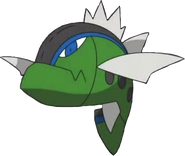 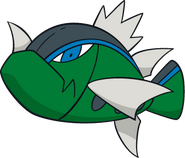 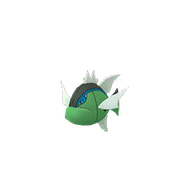 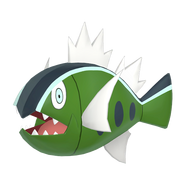