Basculegion is a long fish-like Pokémon with green skin and a black streak along its back. It sports white fins with its dorsal fin having three spines. Around its body is a red or teal smoke that forms into facial "hair", eyebrows, and spots on its body. This red or teal smoke also fully engulfs its tail and creates a streak across its body.

Basculegion is a ferocious Pokémon that gets enraged rather easily the moment one senses animosity and will attack its enemies relentlessly until the said enemies are defeated. They fight together with these souls, which attack opponents as if with a will of their own.

Male Basculegion, in addition to their vibrant red coloration, also tend to rush at foes head-on; females, on the other hand, possess a drabber blue pattern and prefer attacking from a distance. During mating season, males become even more vibrant as they attempt to attract mates. Ironically, outside of mating season, Basculegion tend to be solitary, as they require quite a bit of territory to thrive.

This species usually dwells in rivers, lakes, and waterfalls in the Hisui region.

They are able to swim without tiring due to the souls that possess their body which grant them immense power.

Basculegion evolves from White Striped Basculin after losing at least 294 HP from recoil damage, not counting damage that results in its fainting.

Basculegion resembles a bass or salmon with its coloration being similar to the latter. The detail of its spirits originating from fallen Basculin being unable to handle migrating upstream could possibly reference the migration of salmon who often travel upstream to lay their eggs, with many usually not surviving during the migration. As Basculegion is a conglomerate of many restless spirits, it may also be inspired by Gashadokuro.

Basculegion may also be based on the highly endangered Sakhalin taimen, a salmonid freshwater fish native to Hokkaidō waters (the Hisui region is heavily based on the Hokkaidō region of Japan). The fish is also nicknamed the "phantom fish" in Japan.

Their biggest inspiration appears to be the sockeye salmon. This species of salmon usually undergo dramatic sexual dimorphism during reproductive maturity, also called "nuptial coloration". While males become redder, females are normally shown to have become paler. Its size may also be based on a largemouth bass. The two colorations are also slightly reminiscent of the stripe colors found on both types of Basculin.

Basculegion comes from Basculin and "Legion" (a group of demons mentioned in the Bible and also a reference to the large amount of spirits that Basculegion holds.). 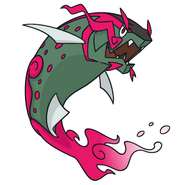 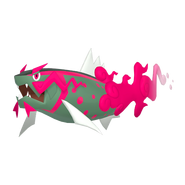 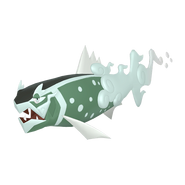